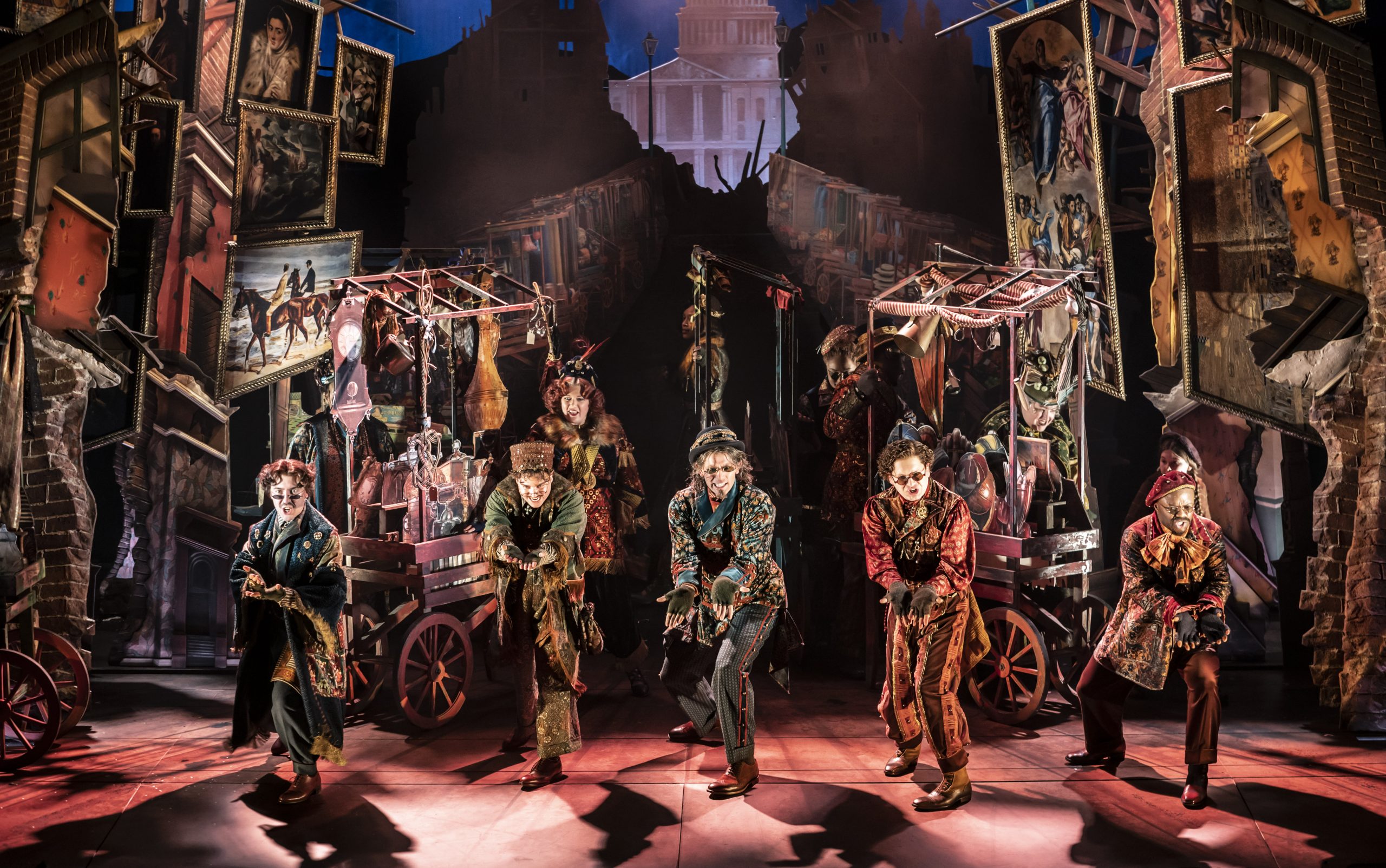 When I first heard that ‘Bedknobs and Broomsticks’ had been made into a musical production for the stage, I began to feel very nostalgic and slightly giddy. The Disney film directed by Robert Stevenson in 1971 which has amazingly catchy songs written by the infamous Sherman brothers, carries a special place in my childhood memories. I am sure it will for many children born in the 1970/80’s. What is not to love?! We had David Tomlinson playing the role of a conman magician who we already loved from watching Mary Poppins, three orphaned evacuee children being shipped off to a small hamlet near the coast to live with an apprentice witch, an enchanted bedknob that can make a bed fly to wherever you wanted to go and ‘The Isle of Naboombu’… I didn’t need any more convincing that this movie was one of the best films in my VHS collection. So, as I began to look forward to watching this stage adaptation, I hoped and prayed it would encapture the majestic quality I had grown up with.

I felt reassured when I discovered that this musical production was in the safe hands of Vox Motus theatre company creators Candice Edmunds and Jamie Harrison. Their business aim was to create visual, contemporary, and innovative theatre for all; two recently praised productions are Flight and Dragon. Jamie Harrison is also one of the world’s leading illusion designers for magical theatre and having created illusions for Harry Potter and the Cursed Child which has won Olivier and Tony awards, I knew that the magical elements of the story would probably be fantastic. However, other than that, I just had to wait and see what opening night would throw at me and my eight-year son. He is also a fan of the original, so I was looking forward to taking him to his first musical theatre experience.

The show begins with a tiny bedroom scene centre stage, where we watch the three children Charlie, Carrie and Paul lose their parents during The Blitz. The staging is brilliantly clever here. From that tiny, intimate bedroom scene we see the house crack apart and suddenly we are transported to a chaotic city scene during an air raid, filled with broken buildings, sirens, plenty of smoke and a blood red moon. In silent action, we watch the children journey from the mess of the broken city to a train to be evacuated to the village of Pepperinge Eye. The scene changes were fantastic; props and beautifully designed set pieces were moved around the stage by the actors and beautifully lit by Simon Wilkinson’s designs. It was a well-executed start and I knew that if it carried on this way, I was going to really enjoy the show. Luckily it did!

We next encountered some of the new musical material as the Rawlins children sang three songs whilst they waited for their new carer, Miss Eglantine Price to arrive. The children were all fantastic and confidently owned the stage. ‘Negotiality’ was a particularly good new number and superbly sang by Conor O’Hara. His role of Charlie brought lots of comedy to the story and my boy particularly liked him and regularly laughed when he was on stage. When the brilliant Dianne Pilkington appeared as the funny and charismatic Miss Price, the magical elements of the show began to take off and the audience were treated to their first puppet! When Miss Price enchants her broomstick, the broom whizzed around stage with no evidence of human interaction and when she flew into the sky, she became a tiny little puppet witch on a broom which delighted the audience and gave us a real belly laugh. Similarly, when Eglantine first uses a smell to turn Charlie into a rabbit, the clever use of smoke, ensemble torch lighting and goodness knows what other trickery, created the perfect illusion and everyone erupted at the visual sight of Charlie transforming into a soft, white bunny before turning into a rabbit puppet. The puppets were beautifully detailed and the puppeteers expertly brought them to life.

The next bit of magic came in the form of the illuminated, flying bed! Again, goodness knows how they made this happen without the audience seeing the method, but it was wonderful and hearing all the gasps from around the theatre showed that everyone enjoyed the spectacle. The characters flew to London to find Emelius Brown, who Miss Price hoped would have the spell for Substitutiary Locomotion so that she could help the war effort by enchanting objects that could fight the Germans. Emelius Brown, played by Charles Brunton, was fantastic. He played the role differently to David Tomlinson, he was more eccentric and almost more foolish but it worked extremely well. This version of Emelius was more charming, fatherly and fun for the children to be around and it made the show feel cosier. Next up, was one of my favourite songs and scenes from the film ‘Portobello Road’. The set was beautiful! Hanging portraits and lamps filled the stage and the ensemble cast wheeled round stalls filled with beautiful antique props, again it was beautifully lit and provided an exotic, enticing atmosphere. It’s only fair to mention here how fantastic the ensemble was, and it really showed during this number. Their costumes were stunning and so detailed. The scene was so well done.

We moved on to the infamous ‘Isle of Naboombo’ or the’ Isle of Nopeepo’ as it is known in this production. The lagoon scene is created using illuminated set pieces, florescent fish puppets and a huge puppet fish who commands the ballroom dance. This fish was genius, so funny. The cast lifted and manipulated Miss Price around the stage so she appeared to float as we all sang away to The Beautiful Briny Sea. Then we were transported to the magical isle where Sherman the bear, King Leonidas the lion and his advisor Angela the bird live. The huge puppets triumphantly captivated the audience and they managed to recreate the most difficult part of the show in my eyes. I’m sure the other children in the theatre will have loved this scene as much as my boy did as he’d never seen anything like it before.  The group manged to trick the lion and steal the magic spell they needed.

The finale of the show had us back at Pepperinge Eye where Eglantine, Emelius, Charlie, Carrie and Paul prepare to fight the enemy using the stolen spell from King Leonidas. We have a huge magical scene here with many illusions and magic tricks for the final showdown! We laughed as floating armour and clothing danced about the stage and bopped enemies on the head. Swords charged at the enemies and the group managed to win the day. A deserving finale to a brilliant show!

Well, if you hadn’t already guessed, I absolutely loved this show! Well done to all involved. My boy loved trying to figure out how they did all the magic tricks and even I couldn’t solve a few! Again, that is a testament to the clever lighting and backdrops to trick the audience throughout.  Go see this delight of a show and take your children with you! Smart, humorous, magical, and really beautiful to watch.

You MUST book this, truly magical!