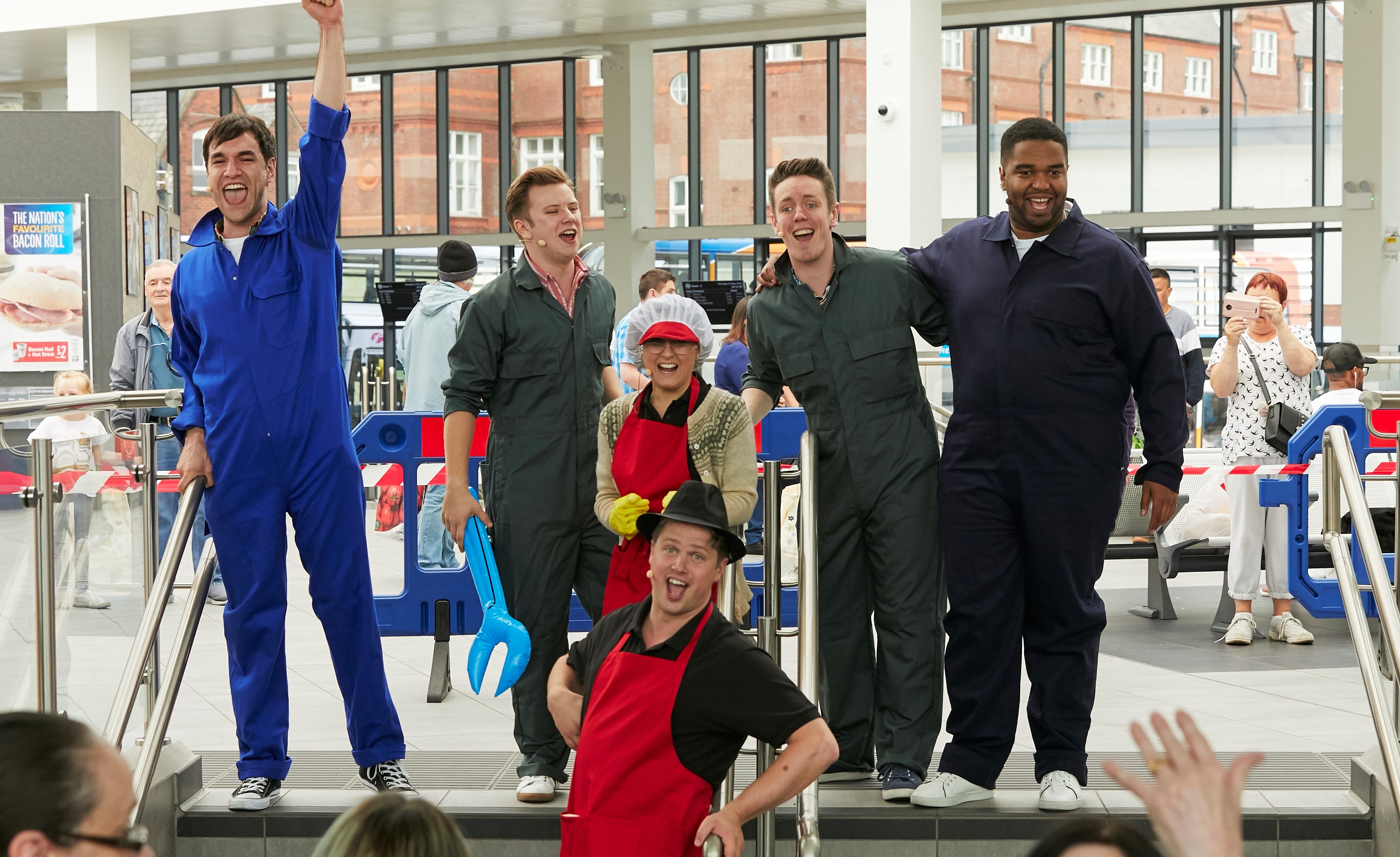 In the summer of 1963, a British musical film came out called ‘Summer Holiday’ featuring singer Cliff Richard and Directed by Peter Yates.  The film did well at the cinema in the United Kingdom but flopped in the USA due to it being released two days after the assassination of John F. Kennedy.

Katie and I went to watch the stage adaptation at the Octagon Theatre last night in Bolton starring Don played by Michael Peavoy and Barbara played by Eleanor Brown. We arrived at Bolton bus station interchange to be greeted by some of the cast members, who began to start the story. A really different approach watching a musical performed at a bus station in the middle of Bolton.

Set in Bolton the musical tells the story of a group of bus mechanics who want a summer holiday away from a wet miserable Bolton. Don convinces the bus company to lend them a double-decker bus for a week and the group decide to go to a trip to the south of France and decorate and adapt the bus for the journey. They start their trip and pick up a few strays along the way including Barbara running away from her fame to find a different life and ends up finding love with Don.

The group pick up a musical trio called ‘Do Re Mi’ consisting of three band members Mimsie played by Isobel Bates, Cyril played by Alexander Bean and Angie played by Sarah Workman who break down in their mini car. The group end up giving them a lift to Athens instead of the original destination France, where ‘Do Re Mi’ has been booked to perform.

Highlights for me included the guitar solos from Edwin played by Luke Thornton (You can really Rock out)! Angie played by Sarah Workman and Steve played by David Heywood. When they played together we really enjoyed the tunes ‘Let us take you for a ride, Swinging Affair and Summer Holiday’. Plus we loved the drummer Cyril played by Alexander Bean.

Another highlight was the song ‘Bachelor Boy’ performed by Don and Barbara who together complimented each other’s voices beautifully. Don reminds me of a young Ed Westwick in his looks especially singing this song (Don’t ask me why) – honest its a compliment.

A big part of the production was Barbara’s overbearing pushy mother Stella played by Barara Hockaday. Stella and double act partner Jerry played by Greg Last were hilarious together especially when Stella started banging the Tamborine on her body and singing very funny!

After the bus station scene, we all boarded the real ‘Summer Holiday’ buses where the cast entertained us as we made our way to Bolton Town Hall. Edwin was singing away and getting us to wave at the other five buses as we pulled outside of the town hall. We then got off the buses and watched more of the production outside of the magnificent grade two listed building, watching the cast sing and dance to us on the steps (Very famous steps which Sylvester Stallone ran up for the 2015 Warburtons bread advert)

Also lovely meeting Jeff who worked at the Octagon Theatre at the interval, who told us about the history of the theatre and Rosslyn Colderley and her daughter who is a trustee for the Octagon Theatre. They all made us feel very welcome, thank you.

A good production, with some funny scenes in and full of 1960’s music. If you want an uplifting, laugh out loud comedic musical then this is for you.

Thank you to the Octagon Theatre, Olympus Chip Shop and the TFGM Bolton Interchange for making us feel welcome.