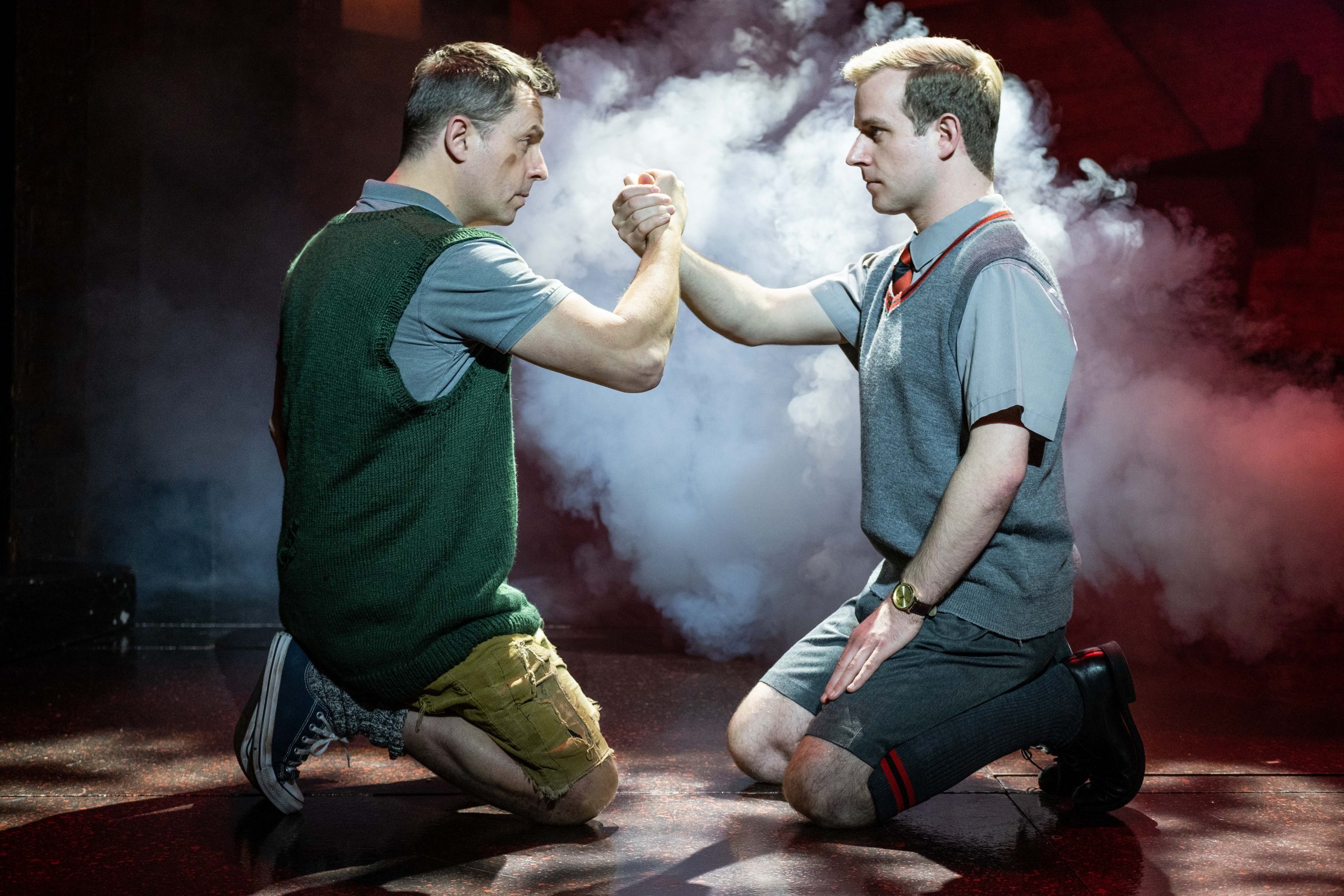 Written by Willy Russell ‘Blood Brothers’ tells the story of two twins who are separated at birth and grow up on the opposite side of town only to meet again in the future under fateful consequences.

Curtains open at the brothers funeral, dark, morbid and sad on the present day and set in the early 1980’s. All of the characters are on stage morning the two brothers deaths. Narrated by Robbie Scotcher who tells the story of two brothers.

Heading back to the beginning Mrs Johnstone played by Niki Evans. She is living in a run-down part of Liverpool, United Kingdom and struggling to bring up her many children, after her partner left her she felt pregnant with two baby twin boys. Due to her not being able to cope she gives one of the twins to Mrs Lyons played by Paula Tappenden, Mrs Lyons can’t have any children of her own. Between them, they keep it a secret from the boys and the rest of their families. A decision which later will have grave consequences. Both boys grow up in different parts of town one to a poor family, Mickey played by Josh Capper and one twin to a rich family with Mrs Lyons which is Eddie played by Joel Benedict. Both end up meeting one another while playing on the street.

The first scene when Mickey and Eddie meet each other when they are seven years old is hilarious. They both bounce on stage and it’s also the first time we see Mrs Johnstone’s other children especially Sammy played by Pete Washington. Sammy, Mickey’s old kid brother who spits all the time and is a real rogue in the pack. Which Mickey and the other kids look up to. The scene between Mickey and Eddie is lovely when they meet because it completely highlights how even at seven years old they have had completely different upbringings and see the world in a different light. Mickey teaches Eddie how to spit and ride horses and Eddie learns how to integrate with other children. Mickey is truly hysterical and had Natalie and I laughing out loud!

My other favourite scene came in the second half the Teacher played by Nick Wilkes. Eddie’s Professor at a private school who spoke posh and was being quite mean to him. The next scene then cut to Mickey’s run-down school in Liverpool. Nick quickly ran to the back of the room messed up his hair, threw his robe off and pulled his tie to one side to play the teacher in the classroom in Mickey’s school as the set came in and changed his accent. Natalie and I screamed out loud we loved this scene! Very Clever!

Other highlights for me were Mrs Johnstone’s vocals on the ‘Never Never, Marilyn Monroe and Tell me it’s not true’ and the Narrator played by Robbie Scotcher who had really strong vocals. I also loved Mickey and Eddie’s vocals during ‘that guy’.

The ending came with a sudden shock as very loud bullets in the last scene. Natalie and I jumped out of our seats and it took a while for the audience to recover. Adding to the dramatic intensity of the scene. Also very sad and Natalie and I were crying because the scene was beautifully directed by too by Bob Tomson and Bill Kenwright.

All in all a fantastic production the cast and crew were amazing. Star performances for me were Mrs Johnstone (Niki Evans) Narrator (Robbie Scotcher) Mickey (Josh Capper) and Eddie (Joel Benedict) all very experienced and talented actors and I particularly enjoyed their performances especially the last scene when Mickey goes to see Eddie at the Town Hall – powerful, emotional and very sad.

I was disappointed that the original cast of Mickey played by Sean Jones and Sammy played by Daniel Taylor as I love these too, but they had come down with Covid so weren’t on tonight. However the stand in Mikey (Josh Capper) and Sammy (Pete Washington) did an excellent job.

I also must give a shout out to Linda played by Carly Burns who starred as a friend and love interest for both Mickey and Eddie. A beautiful actress who played various different ages seamlessly.

If you want to be taken on a rollercoaster ride through every emotion possible this is for you! Fantastic acting, writing, direction and music. This is now in Manchester for two weeks at the Palace Theatre. An award-winning production which has been on tour for over 20 years all over the world. Believe me, you will not regret this go and book this NOW!!!

Congratulations a 5 star from us!