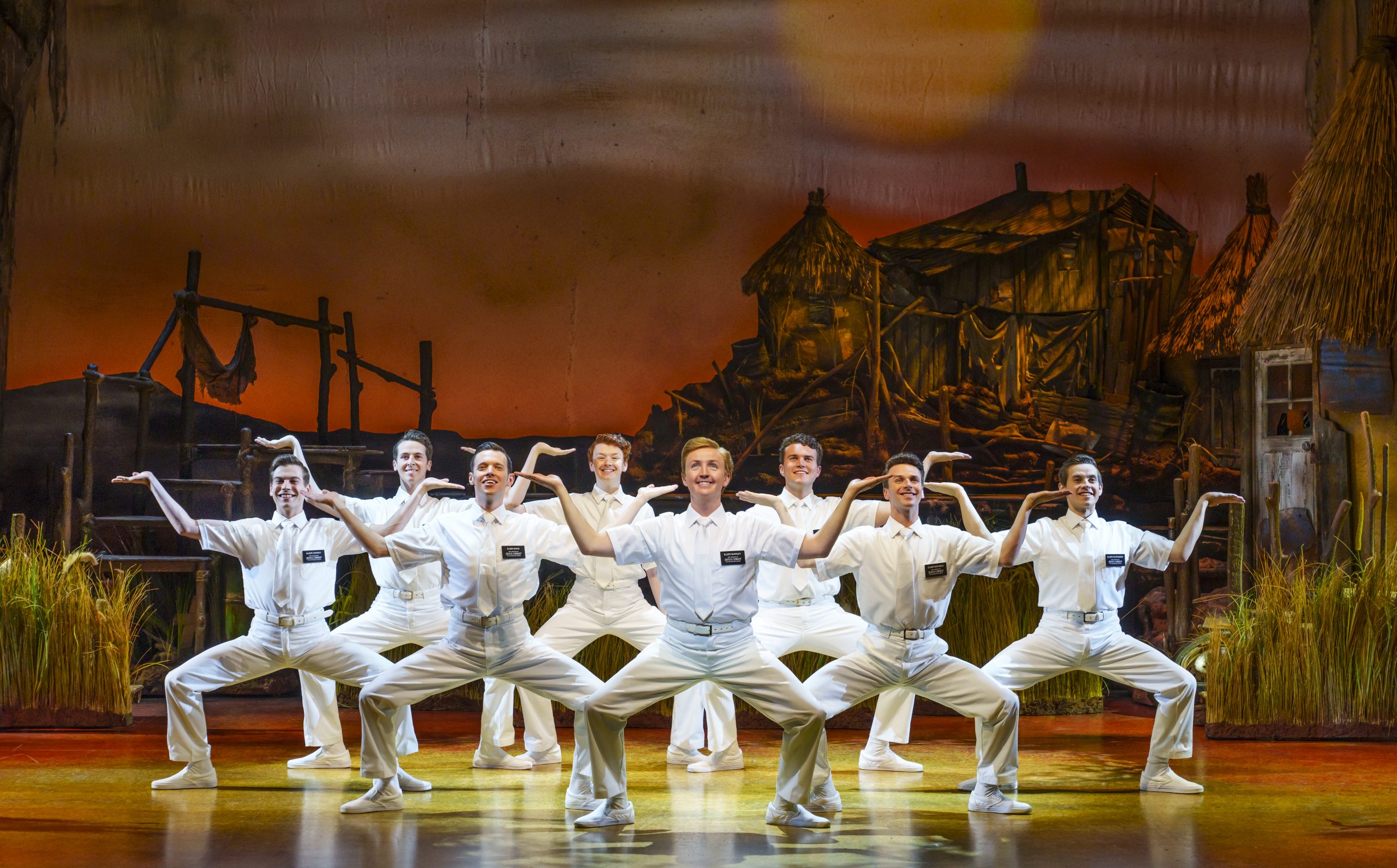 The Book of Mormon made its debut a decade ago this year, met with Universal acclaim. It tells the story of Elder Price and Elder Cunningham (expertly played by Robert Colvin and Conner Peirson respectively), two young Mormons setting out on their Mission, sent to Uganda to convert the people of a village run by a War Lord whose name is Butt-F–king Naked (an on-the nose reference to real-life General Butt Naked of Liberia). Hijinks ensue.

You can’t talk about The Book of Mormon without talking about the shock value of the script. To be blunt, there are many parts of the plot itself that have not aged well in the ten years since it was created. It does attempt to side-step racist accusations in making its version of Uganda a take-down of the misty optimism of Lion King (another Broadway super-hit) but it does not always land. There are many of the jokes during the scenes in Uganda that cross over from being dark humour into feeling uncomfortably racist. The female lead Nabulungi (played gorgeously by Aviva Tulley), who is the brightest woman in her village, thinks that texting is typing a broken typewriter, which reads less as smart commentary on wealth disparities between countries and more just laughing a black woman. This is alongside the obvious repeated jokes about AIDS and dead babies, which get tired very fast. The jokes aimed at the Mormons in contrast land a lot easier, mostly taking aim at repressed sexualities, white-saviour complexes and the premise of the LDS religion based on Joseph Smith’s discovery of golden plates.

You also can’t talk about The Book of Mormon without talking about how impressive the production and entertainment value of it is. This is a full-on old school Broadway-esque musical, complete with ensemble tap dancing numbers and mad-cap set changes that cycle between Biblical Egypt, a Ugandan village and a nightmare-vision of hell amongst others. The musical numbers are gloriously catchy from the very beginning. “Hello”, the opening song, sets the scene perfectly and brought the house down. It truly was spectacular. Other favourites of mine on the night were “Hasa Diga Eebowai” (a send-up of Hakuna Matata), “Turn it Off” (which includes the lyric “Don’t feel those feelings, hold them instead! Turn it off, like a light switch. Just go click! It’s a cool little Mormon trick”) and “Spooky Mormon Hell Dream” (where Elder Price meets Genghis Khan, Jeffrey Dahmer, Adolf Hitler, Johnnie Cochran, and Satan himself).

The cast themselves were all also magnificent, all carrying off the cartoonish-ly drawn characters perfectly. Robert Colvin and Conner Peirson play their roles of the uptight perfectionist and dorky sidekick perfectly, and Jordan Lee Davies steals the scene every time as wonderfully repressed Elder McKinley. As mentioned previously, Aviva Tulley is brilliant as Nabulungi and carries the role with earnestness that will break your heart.

With all this, it would be extremely difficult to not enjoy The Book of Mormon. Even through my occasional wincing, I was truly caught up in the superb performance of the cast and overall general spectacle that was happening on the stage. It does not drag at any point during the two-hour run time, and the ending itself feels satisfying, tying the plot off in a neat bow. I would definitely recommend catching this production if you have the chance to

Review by Laura May