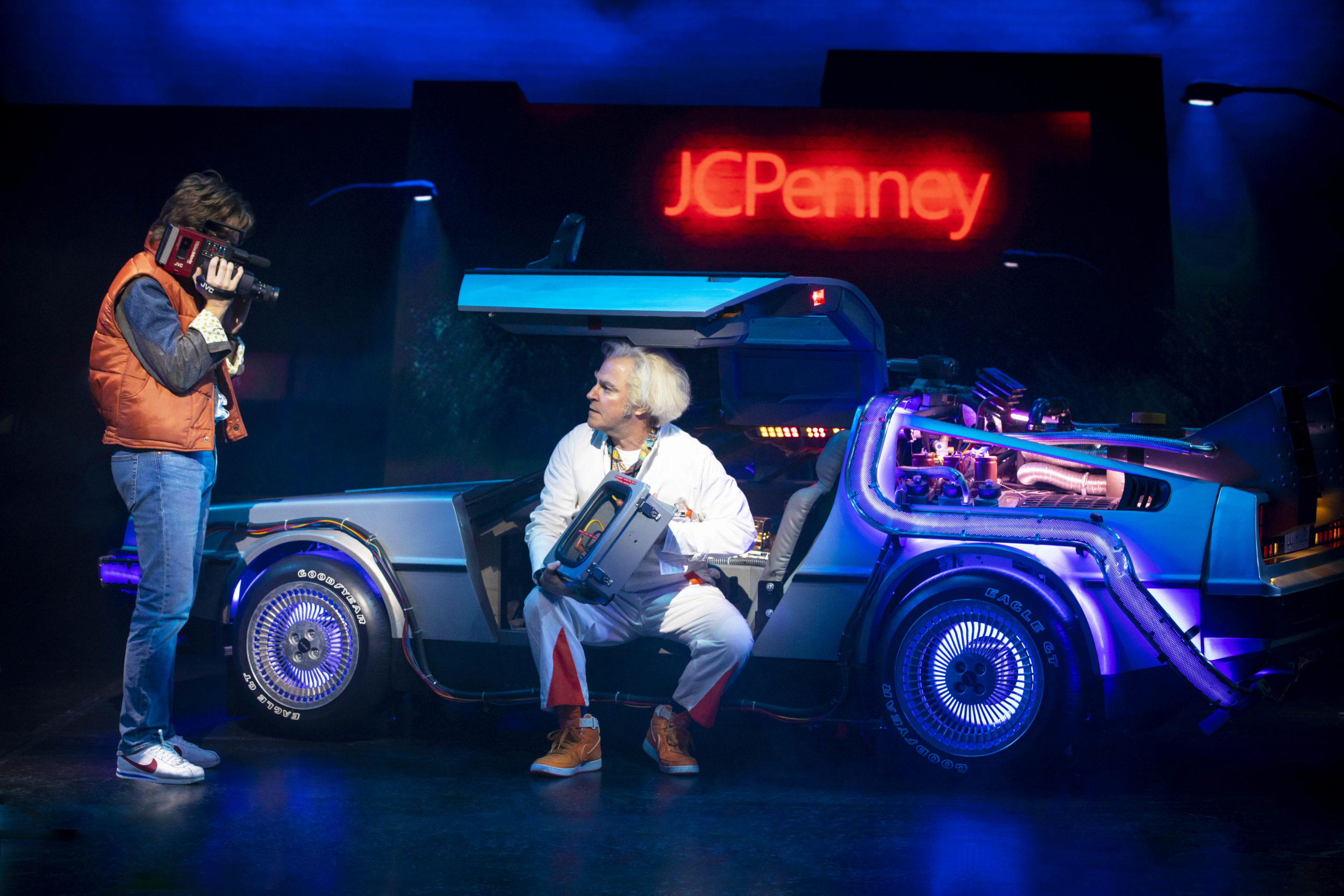 When you think of the ‘Back to the Future’ movies you think 1980’s retro, cool soundtrack, amazing cast and an awesome story line. Growing up as an 80’s kid, films like the Back to the Future movies were way beyond there time. Winning award after award no wonder when you look at the original production team – Steven Speilberg (Executive Producer ) Bob Gale (Writer and Producer)  Robert Zemeckis (Director) and Oscar-winning Alan Silvestri as a composer. The production cost $19 million to make and made $389 million at the box office the highest grossing film of 1985 wow!

Now 38 years later Back to the Future is BACK in musical form.

Last night we attended the very glamorous night of the world premiere press night at the Opera House in Manchester, The blue carpet was out, the back to the future car was at the front posing for pictures with fans and the celebs were heading over buckets of them! The press desk and foyer was dressed up like ‘Enhancement under the sea’ dance which was a nice touch!

Chris and I entered a jam packed auditorium not a spare seat in sight. To a funky looking scientific stage with the Back to the Future logo date and time on the large screen on the stage. The story focuses around Bob Gales original plot from the first movie where Marty McFly travels back to 1955 thirty years previously in scientific Doc Browns famous Deloeran Time machine. Marty played by Olly Dobson has a striking resemblance to Michael J Fox as a teenager and even picking up his little quirks in voice and movement. I applaud Olly for his role, because he has clearly studied the character in great detail. The same going for Hugh Coles who plays George McFly. Especially in the family scene where we first meet Hugh, the audience let out a big gasp as they could believe how much he was like the original Crispin Glover. His movements, dancing, voice and determiners he absolutely stole the show for me, congratulations Hugh!!

Hatley’s set design was truly outstanding bright, loud and lots of thought out sequences. We love Docs place with lights, moving parts and between the set design, Chris Fisher , Vanstone and Lutkins lighting the scenes are remarkable and perfectly fitting to the humour and script of the show. The scene with Doc played by Roger Bart and Marty in the second half when they are planning how to travel back in time is hilarious! With the set on fire and fantastic illusions!

Roger is a Tony Award winner himself from the show ‘The Producers’. Roger makes a perfect Doc Brown and it was really lovely to witness him meeting the real Doc Brown ‘Christopher Lloyd’ last year. I loved Docs new scientific scenes with the flux capacitor and the dancing girls amazing!!

Other highlights for me were Alan Silvestri and Glen Ballards sixteen extra songs added to the musical adaption. When you have careers as long as these two then there is no doubt in the my mind that the music, would blow my mind. Goldie Wilson played by Cedric Neal is outstanding. He has a high vocal range in ‘Gonna start somewhere and put your mind to it’ and he was one of my favourite cast members for his high energy and amazing voice!

The whole cast for me really embodied the true cast from the original back to the future films. Under the direction of Colin Ingram (who brought you Ghost the musical and many other successful productions) and Bob Gale the original writer of the movies who has won multiple awards and having music by Alan Silvestri and Glen Ballard; who are eight time Grammy award winners and music composers / writers of the highest level make the production mind blowing with their catchy and punchy songs its easy to quickly learn them and tap your feet too. I really loved ‘Something about that boy’ by Lorraine Baines played by Rosanna Hyland her crush on Marty was just hilarious especially when she was chasing him around her bed room.

You know what was really special to? Listening to the original ‘back to the future’ songs and score sitting in a room woth Alan Silvestri who actually wrote them, very special moment! Plus just hearing them via the amazing orchestra conducted by Ethan Popp and Bryan Crook who were perfect!!

One of my favourite scenes in the production was the Enchanement under the sea dance. I loved the set and bubbles came from the sides of the stage to make it extra special. Plus hearing icons songs like ‘Earth Angel, Johnny B.Goode and The Power of Love’ really had me and the audience rocking out.

I must mention the costumes too which quickly transported us to the 50s and 80s eras quickly. Well done to Wendy Phillips and her team, I loved the 50s outfits the girls had on!

Honestly the Back to the Future musical team did the films complete justice. As a big 1980’s fan they as we say in Manchester ‘smashed it”! Don’t be surprised if this is still in production for the next 30 years on world tours.

I also loved the fact that Bob Gale himself has been to watch it every night since it started from February 20th to make sure its perfect and make some ‘tweaks’ as he told me last Sunday.

Not surprisingly a standing/screaming ovation of cheer at the end for the final scene. I wont tell you; but its truly spectacular pondering “How do they do that on stage”? Which is down to Chris Fisher the illusionist and Ben Stevens and the special effects team! Blew my mind the ending…. I mean WOW!!! Lovely to see the film’s original creators Robert Zemeckis and Bob Gale take to the stage with Alan Silvestri and Glen Ballard to a crazy applause!

Never given out 6 stars before well deserved!

6 stars Congratulations cast and creative, plus all the months of PR by Alison and her amazing team at ATG!

A nostalgic journey to 1.21 gigawatts of time travelling heaven!

I am going back to see this!! I cant wait! I felt lucky to be part of something special like this production.