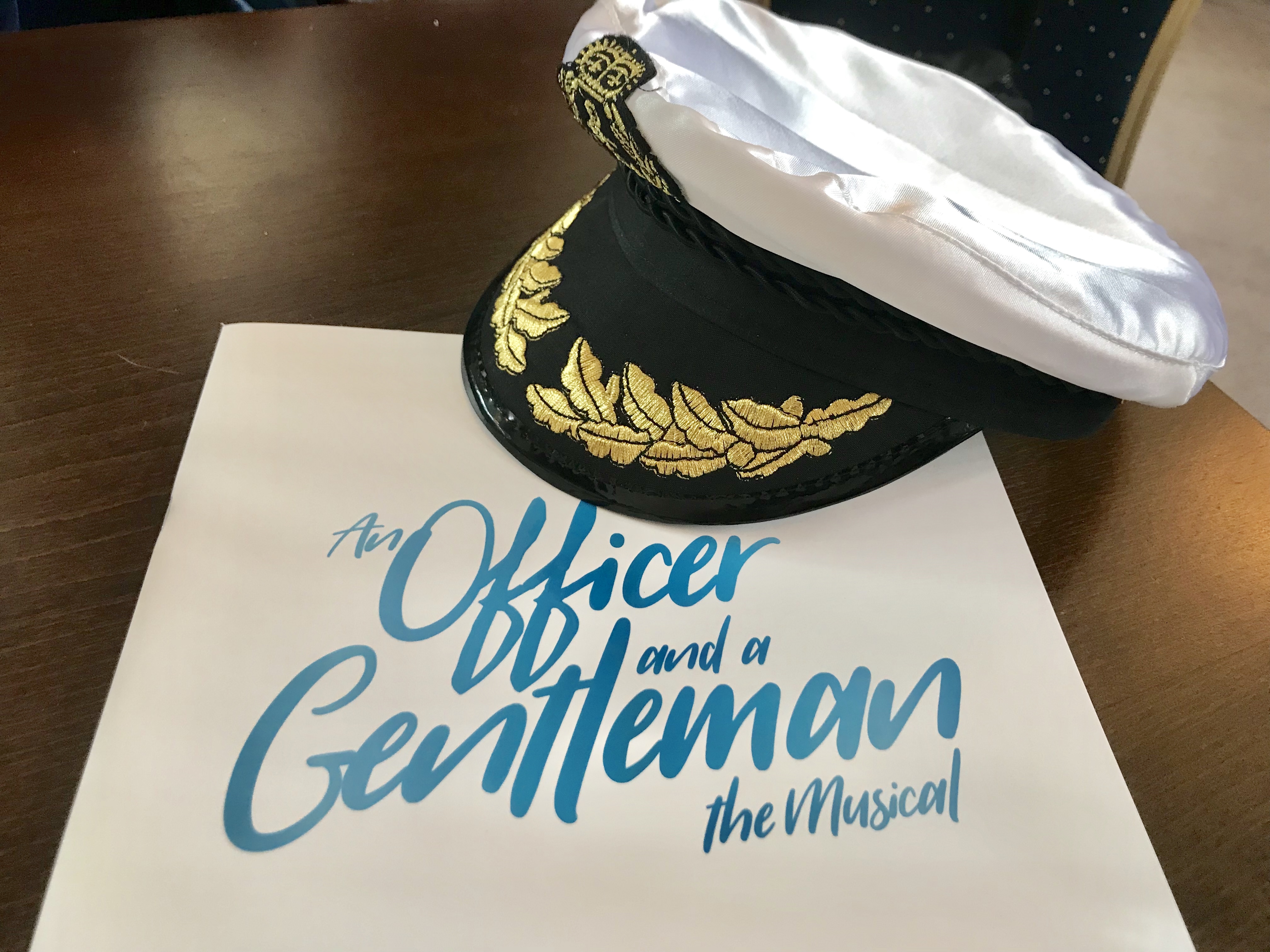 April of this year I was invited to preview the new musical ‘An Officer and a Gentleman’ at the beautiful 1800 century Grand Theatre in Leeds, United Kingdom. The new musical is based on the 1982 film ‘An Officer and a Gentleman’ starring Richard Gere and Debra Winger. The press arrived at a Q&A with the cast and creative of the new musical. We were lucky enough to have the original writer there from the 1982 film Douglas Day Stewart. Dressed in a black leather jacket and his grey hair slicked back; this man oozes charisma and charm. The cast highlighted how it was a privilege to work with the original writer of the film. It’s mad to think how the majority of the cast weren’t even born when the original film came out in 1982 and it was nice how Zack Mayo played by Jonny Fines highlighted how important it was to keep the story similar to the musical.

We asked the cast about how easy it would be to translate the film over to a musical, Paula Pokrifki played by Emma Williams spoke about how the musical had extra songs added. Songs from the 80’s which would give the musical a more fun element. This intrigued me and I couldn’t wait to watch the production.

One thing that all of the cast mentioned in the Q&As is how good it was to work with Director Nikolai Foster, they all spoke fondly of him. Even though he wasn’t present on the day, it felt like he was there. They all praised him for how down to earth he was and how easy it was to work with him in rehearsals.

My favourite part of the whole day was listening to the original screenwriter talk about his life and how he came to write about the production ‘An Officer and a Gentleman’ he said the story was about his life and the time he spent as a Naval Officer Candidate in 1965. He too had a tough officer he put him through harsh basic training and he did date a local factory girl while he was training. Lovely to hear of a story first hand from the person that wrote it.

I asked him about his relationship with Richard Gere who played Zack Mayo in the original movie. He replied “Richard and I got on really well, mainly because we both had very strict fathers who were in sales” he joked. He also told us about the disagreement about the iconic last scene in the movie. “Of course you don’t know a scene like that is going to become popular in a movie till it goes out, I just wanted the movie to be right, exactly how I wrote it.

I came to set on the last day of filming, my son was quite ill with a tummy bug. A saw Richard and Debra who played the leads in the movie Zack Mayo and Paula Pokrifki walking out the factory holding hands on the last scene. I took Richard to one side and told him the last scene wasn’t right. I spoke to the director to Taylor Hackford and we all came to an agreement that Richard should shoot one scene the way I wrote it and if it didn’t look right in the edit we wouldn’t use it. With that, he picked up Paula and did the scene the way I wrote it. I am so glad Richard agreed to it.

A few weeks later we were in the edit suite. The last scene came up and to be honest it didn’t look right. Richard picking Paula up and carrying her out of the factory. It just didn’t fit. A few weeks ago the director came to me with the song ‘Up where we Belong’ by Joe Cocker and Jennifer Warnes. We added the song to the final scene, and that was it magic! The scene now just worked.

Listening to Douglas tell this story was beautiful he told it with such passion and fought for what he really believed would work.

Today the film has been turned into a musical. Currently on tour in the United Kingdom. After the press interviews, we watched the full production. The cast were right Director Nikolai Foster really had turned the film into a lovely production. With the leads, Zack Mayo played by Jonny Fines and Paula Pokrifki played by Emma Williams stealing the show with some on stage great chemistry.

Another highlight for me was Ray Shell who played Sergeant Emil Foley his relationship with Zack was critical to the production taking it from good to epic.

Credit: An Officer and a Gentleman

Plus the addition of extra 80’s tunes was nice and got the audience in a nostalgic mood. New songs added included ‘Material Girl, Toy Soldiers, Heart of Glass, Don’t cry out loud, Alone and I was made for lovin’ you and other tracks too.

All in all me and the rest of the press had a wonderful day in Leeds, thank you ATG, Alison and Chloe 🙂

‘An Officer and a Gentleman’ production arrives at the Opera House in Manchester on Monday 13th August 2018. Definitely go and book this, a wonderful story with a very talented cast and crew.