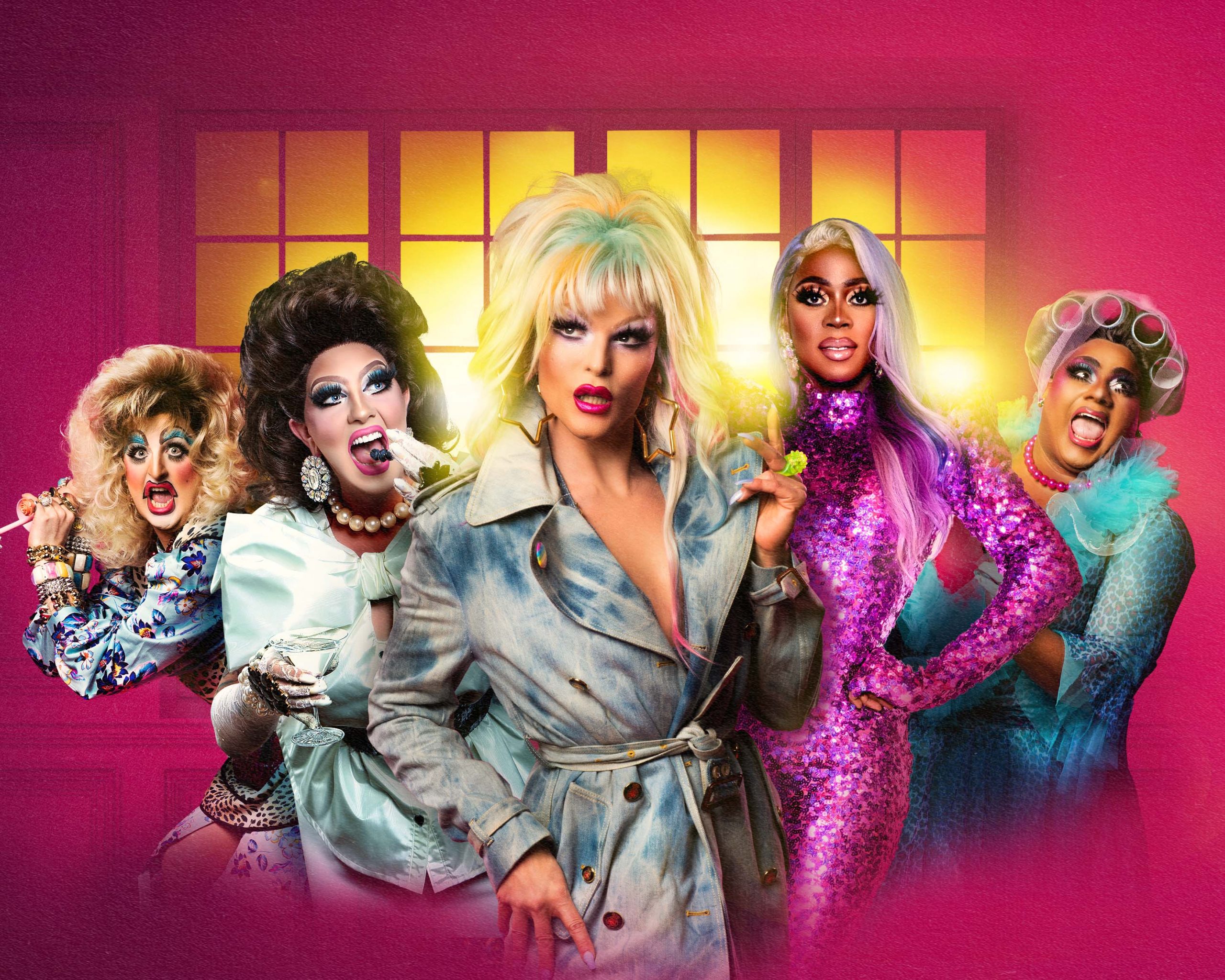 The year is 1991, and a motley crew of characters has been summoned to Tuck Island by the mysterious Lady von Fistenburg for a dinner to honour Charles and Diana’s 10th anniversary (their portrait is hilariously mounted on one wall of the set the whole way through action). The cartoon-like cast of guests is comprised of: a fading American popstarlet, a glamorous American television meteorologist, the editor of World of the News, a misogynistic and highly-strung conservative MP (who has arguably one of the best lines, declaring “I can’t kill anyone! Not with these soft conservative hands!”), a philandering television producer and working-class triplets who run a budget catering company.

If this is sounding like the beginning of an Agatha Christie novel, you would be on the right track. The play has been self-described as “a Dragatha Christie murder-mystery”, and that is exactly what it delivers. Death Drop, written by scene-stealer Holly Stars – who play the roles of the three Bottomley sisters: Brie, Blue and Spread – first opened in London last year, before the West End theatres closed for a second time. Now it’s bac, with a new cast, and is on tour.

The current line-up includes stars familiar faces from the Drag Race franchise (Willam, Ra’jah O’Hara, Karen from Finance and Vinegar Strokes) as well as faces from the UK comedy and theatre scene: drag kings Richard Energy and Georgia Frost. Each of them brilliantly holds their own on the stage, no one personality drowning out any other. The play itself never stops to catch its breath, hurtling mile-a-minute through 90s pop-culture references, innuendo one-liners, song, and dance numbers, and tongue twisters. The gender-flipping of the roles played is never referenced (though the fourth wall is broken on other occasions) but serves to enhance the unreal, cartoonlike energy on the stage.

I want to give special mention here Georgia Frost and Richard Energy, who play Phil Maker and Rich Whiteman respectively. Their mastery of physical comedy lit up the stage and delivered some of the biggest laughs of the night, which is no small feat next to the larger-than-life drag queens they share the stage with. The murder mystery plot is almost secondary to the spectacle of it all: the gloriously sequined costumes, the hit-you-over the head double-entendre (“He gifted me a beautiful pearl necklace!”), and dance breaks where the dead don’t quite remain dead.

There are explosions, thunder and lightning, and projectile vomit thrown in for good measure. The design of the set is relatively paired-down in terms of objects (save for large, billowing velvet curtains and saturated purple tones), and the action takes place in one room. This helps to keep both the characters and costumes shining without distraction from the background, as well as keeping the action on track.

There are a couple of points where the joke may go on a bit too long (there is one scene in the second half in particular after a French detective joins in the fun that may benefit from being some beats shorter), and occasionally the toilet-based jokes are repeated a too many times, but that does not detract from the laughs that come consistently through the two-hour run-time.

Death Drop isn’t subtle, but then, that isn’t what it’s aiming for; Death Drop is a rollicking fun time, that will leave a smile on your face all the way home.