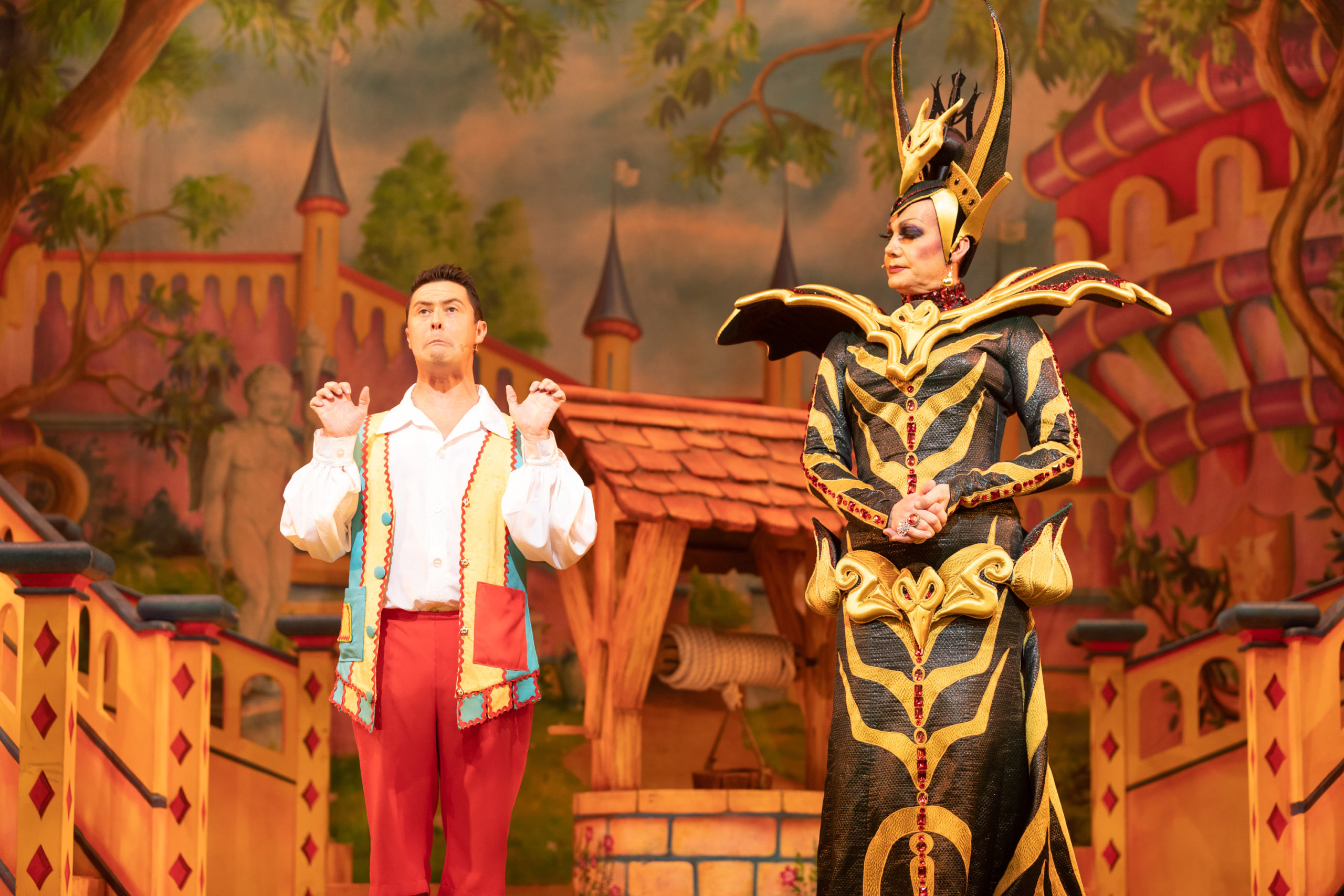 Pantomime time is my favourite time of year. Christmas is around the corner and panto is a very British tradition which I thoroughly enjoy!

I interviewed the cast last month who were excited about rehearsals and looking forward to the panto. Among them last year’s returner Ben Nickless who played Buttons in Cinderella last year, himself a trained comedic and absolutely hilarious. This year in Snow White returning as Muddles. I was really looking forward to seeing him in the panto.

Last night Gemma and I attended the very glamorous press night at the Opera House in Manchester on a cold frosty night. Red carpet down, celebs in and we were feeling excited. The theatre was packed filled with families of all ages from small babies to grandparents. The children seemed in good spirits in the audience and a really good atmosphere as we prepare to start.

Suddenly the curtain goes up and the seven dwarfs appear with really funny dangling legs outfits on and when they ran their legs flipped up and down over their costumes with a singalong opening number. The children all giggle in the audience at them. I really enjoyed the dwarfs strong Mancunian accents really bigging up the language and making people laugh.

In enter the stars of the show for Eric Potts (Dame Nora Crumble) and Ben Nickless (Muggles) very funny together and a great comedy act. Really bringing back old fashioned slapstick comedy to the show. At times sometimes laughing at themselves occasionally falling out of character because the script was so funny which made the audience laugh harder. (The Sushi game and 12 days of Christmas) both very funny scenes!

In enter the wicked wicked Queen Lucretia (Craig Revel Horwood, 17 year Strictly Come Dancing judge) looking fabulous in his outfits and played a sort of Rocky Horror type character. Which actually went really well, because he references his bad boy judge image from Strictly. Surprisingly also has a pretty decent voice which I wasn’t expecting from him, because his obvious background in dancing. Often taking on not easy songs like Queen and ‘My Way’ by Frank Sinatra. Impressive Craig and for 54 years of age has a decent pair of legs on him to dressed in drag!

Highlights for me included Eric and Ben political references to Donald Trump and Boris Johnson speaking out of their bums and Ben wore a mini Donald outfit. Together with Willy gags, bottom references and good ole fashioned slapstick humour, I loved it!

The props in the show were also awesome a giant flying fire-breathing dragon which flew over the audience as the children looked up in amazement. Fantastic sets (especially the last one in the palace) and brilliant wicked and flamboyant costumes which looked wonderful.

My favourite parts of the panto were the Sushi Bar scene and the 12 days of Christmas. At one point even Craig losing his bog rolls to the crowd, a curtain coming down and a number of tongue twisters in the Sushi scene.

I came out of the theatre with a huge smile on my face! I particularly enjoyed Ben’s chocolate scene very quick and funny and has double meaning for all ages. Plus Ben’s audience participation with the children from the audience. Clever, controlled and very funny. It’s no wonder he won as award last year at Cinderella for his part.

For me the production is a strong 4 out of 5. A must see for all families and a perfect warm up to Christmas and after.

Snow White is on at the Opera House in Manchester from now until Sunday 29th December 2019. (There is also a signed performance on 17th December)