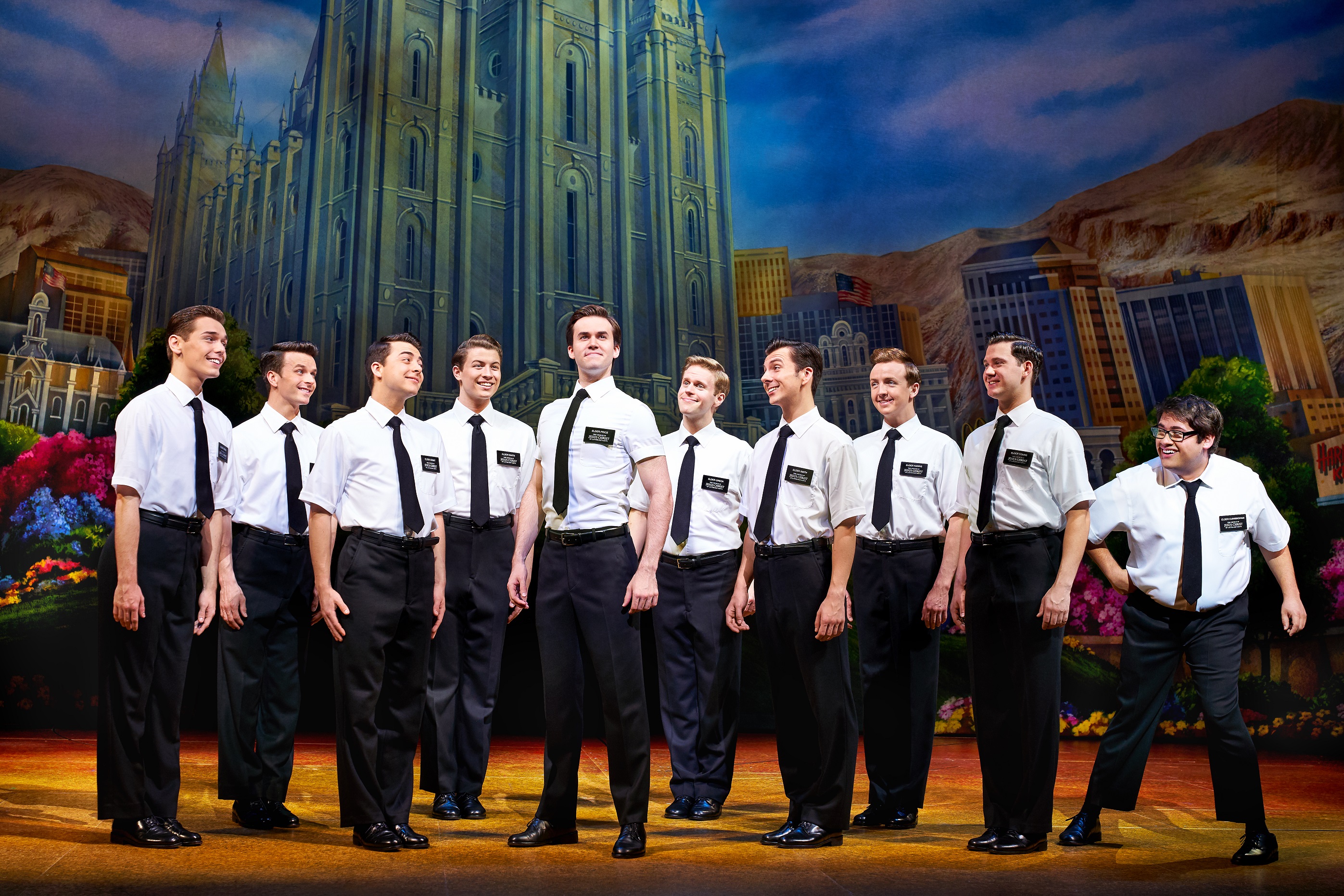 Twelve months ago my cousin Leanne contacted me about this musical the ‘Book of Mormons’ to be honest the name put me off straight away. As I thought it was a religious play that I wouldn’t be interested in. How wrong was I! Delving further into the story I found that it’s a musical, not a play written by two comedy geniuses behind the hit television ‘South Park’ which has been running for over 20 years earning them $200 million each.

Trey Parker, Matt Stone who wrote the script, lyrics and music for the Book of Mormon musical. Plus Robert Lopez who has co-written the music for the musical ‘Avenue Q’.

Last night Claire and I attended the press night of ‘The Book of Mormon’ at the Palace Theatre. We arrived at a red carpet style, celeb invested the glamorous night on a wet and rainy Manchester. This did not alter the mood though.

All I can say is brace yourself for a hilarious opening. The opening sets the mood for the entire night. By the end of the first few scenes, the leads had the audience howling. Although this production is not for the faint or sensitive types there is no denying that South Park’ creators Trey Parker and Matt Stone are extremely talented with very far fetching minds! Plenty of swearing, even using the C word, gags about aids, baby rape and sex are frequent in the production clubbed together with sarcastic light witted humour.

If you have never seen this production before here is a quick summary of the plot line. The Book of Mormon follows two Mormon missionaries as they attempt to preach the Mormon religion to the inhabitants of a remote Ugandan village. The earnest young men are challenged by the lack of interest from the locals, who are distracted by more pressing issues such as AIDS, famine and oppression from the village warlords.

Highlights for me included Elder McKinley (Will Hawksworth) number called ‘turn it off’ very funny. When he and other Morman ensemble were explaining to the two leads Elder Price (Kevin Clay) and Elder Cunningham (Connor Peirson) to turn their feelings off about how they felt around them. The choreography was very funny! Well done Casey Nicolaw!

For me, there seems to be a lot of references to South Park in the show. Jesus’s character in the show, for example, has exactly the same voice as ‘Cartman’ from the ‘South Park’ television series. Lots of digs about religion, race, sex and highly controversial issues. I suppose in 2019 where we live in a super sensitive era where it seems every millennial seems to be offended by everything is offensive to them it’s nice to have a bit of breather from it all. However, the writers Parker and Stone for me are very naughty boys! For me personally, I feel that the shows can go a bit far especially into baby raping clitrous mutation storylines, however, the reaction from the audiences is the book of Mormons is a big success and people around me were howling at some of the scenes.

Scenes with Conner Peirson were some of my favourite parts of the production of a tubby overweight character with social issues; became the star of the show for me and boy he can dance! The baptism scene with Nabulingi (Nicole-Lily Baisden) absolutely hilarious and one of my favourite scenes in the production.

A very talented cast and crew with an enormous amount of energy and realism. You must go and watch the ‘Book of Mormans’ at least once in your lifetime. Controversial, comedy clever and hilarious.

Personally not really my cup of tea but there nothing I can say about this production which wouldn’t give anything but the best review.

An excellent well thought out production not for the light-hearted though. This will certainly change history.

Showing until Saturday 24th August at the Palace Theatre in Manchester.