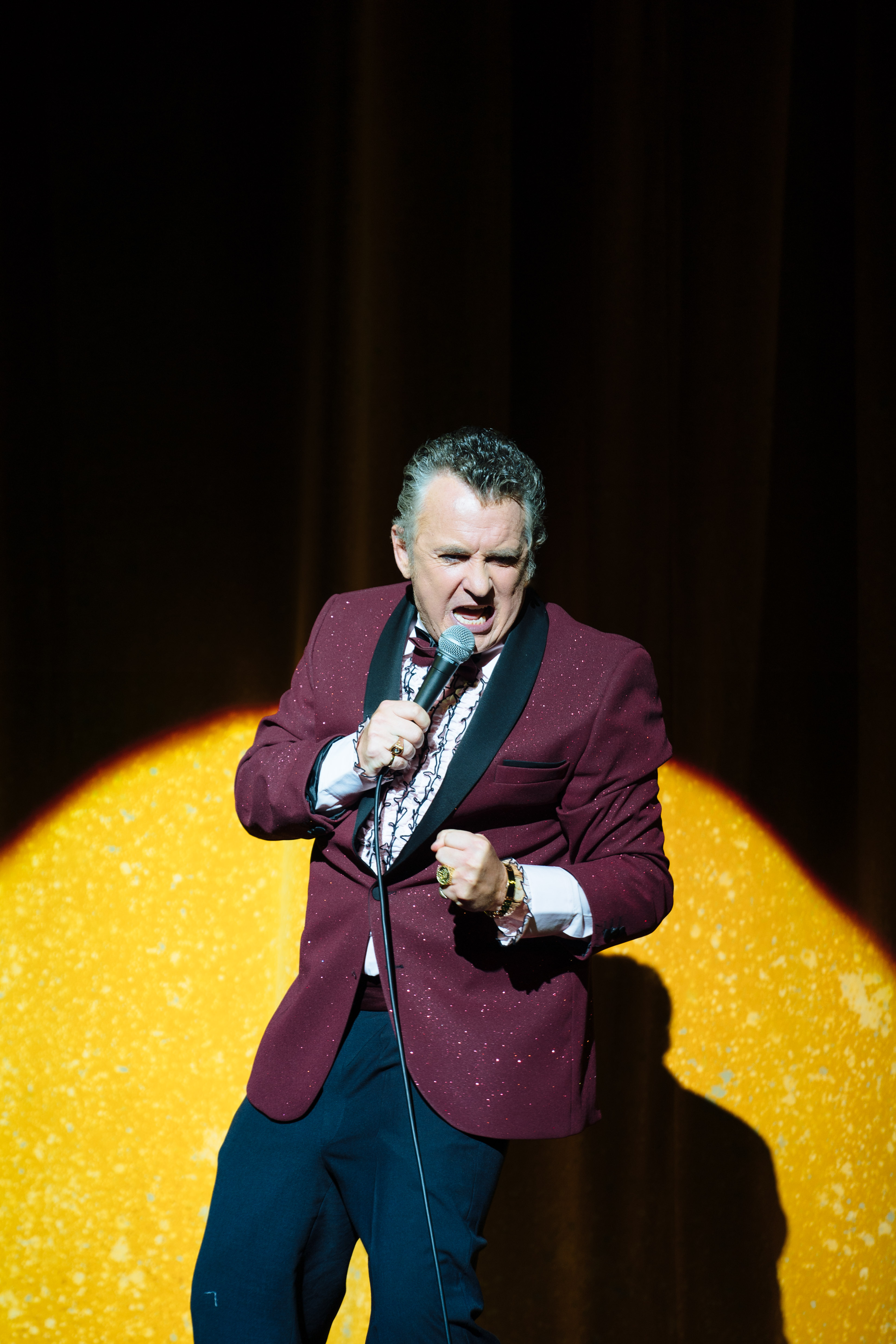 The Entertainer Play is an adaptation of the 50s play by John Osborne who people around me tell me its a classic. Director Sean O’Connor has dragged it forward to the 1980s, to the story of Archie Rice (Shanie Richie) A washed-up drunk of an entertainer who is desperately trying to hold on to his career as a stand-up entertainer. Clinging on it for his dear life. I must admit the humour in the entire production is not for everyone. With sexist, racist and bigority comments. I honestly don’t remember the 1980s being that bad. With the audience giving out milds laugh to Archie jokes.

Having said that Shanie throws all of his wit and enthusiasm into the role and somehow pulls it off. The story also focuses on Archies family and heavily on the 80s time period from life under Margeret Thatcher, records levels of unemployment, with the Falklands war  and at a time where tabloids newspapers like ‘The Sun and The Daily Star’ ruled the United Kingdom full of hate articles, catchy one-liners and page 3 babes!

Archies’ father (Pip Donaghy) plays a bitter, tired old performer plays a negative part really well. Picking and having a go at Archies’ daughter Jean (Diana Vickers) and son Frank (Christoper Bonwell) but you can see deep down inside he cares about them. He reminded me of that generation in that time period very stuck in their ways and doesn’t like much change. Always up for a bit of a tiple (drink) and have their fags close by.

Diana brings plenty of enthusiasm to the role and her on-stage chemistry as a daughter to Archie is nice to see. Especially when Archie doesn’t want to drink alone so encourages the whole family to drink and sup up because he wants them too.

Phoebe (Alice Osmanski, stand-in for Sara Crowe) who plays Archies’ second wife is a forgettable character and really does fade into the background. For me difficult to see that Archie and her would have ever been together, especially with the very over the top whinging.

I did enjoy the set design of the family living room dragging me straight back to the 1980s. Even a painting behind the piano which my Grandma had in her house. Together with the flowery wallpaper, mismatching furniture and big worn-out armchair with the occasional 80s music played in the background I felt like I had stepped back in time.

The second half brings even more doom and gloom where tragic circumstances hit the family. With Archie still pushes himself on the comedic circuit. This time his character seems to care even less about the audience thinks and brings out a blow-up doll performing oral sex on him to bring a shock factor to his dried up comedy performance. The truth behind the mask slowly starts to reveal itself and the sympathy grows even stronger for Archie. As he says “Dead behind the eyes”.

All in all, the script lacks depth for me, even though Shane and Diana brought a lot to a weak script and not much of a storyline. Maybe a play for the plus 60 generations or John Osborne fans.

Check out my interview about the production and brief look into Shane Richies and Diana Vickers Career.