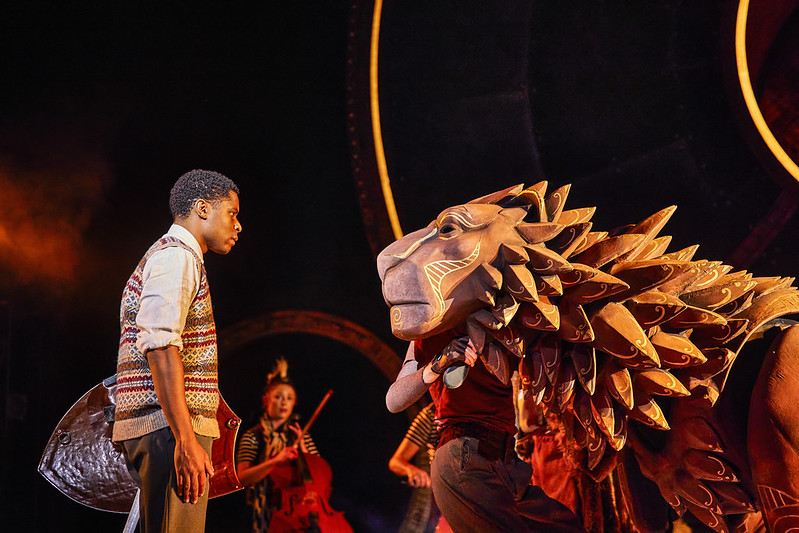 Later made into a film by Walt Disney Pictures in 2005 making $745 worldwide. Making it the third most successful film ever in that year.

In 1989 the 1950 British children’s novel inaugurated The Chronicles of Narnia. The one-act play for two actors was written by Le Clanché du Rand and published in 1989 by Dramatic Publishing of Woodstock, Illinois. It is licensed by Dramatic to theatres worldwide then later In 2011 opening as a play for the theatre and opened off-Broadway in New York City.

Last night mum and I attended the glamourous press night of the latest tour of the play at the Lowry Theatre in Salford Quays, stars of the stage and screen attended and the Lowry had been decorated for Christmas with a big Lion hanging in the main entrance.

The play opened up in the midst of the London Blitz in England in 1940’s. Lucy (Karise Yansen) Edmund (Shaka Kalokoh) Susan (Robin Sinclair) and Peter Pevensie (Ammar Duffus) are sent out of the city to stay with Professor Digory Kirke (Johnson Willis) in the country, in order to keep them safe during the bombings. The stage was dark and gloomy with the orchestra playing which was quite relaxing. The children are then told they are heading to Scotland till the trouble is over for their safety and I wondered how they were going to carry off the train scene.

Perfectly in fact as actors and props came around the children moved up and down as if they were traveling on a busy train. I loved the suitcases which lit up and turned into train carriages which were held up above the children’s heads, very simple clever yet effective. The music which accompanied the train journey was busy busty and again effective. Well done to the musical director Toby Higgins and his team.

Highlights for me included Lucy’s first trip to Narnia. The illusions were wonderful, how Lucy traveled through the wardrobe to a cold bright snowy Narnia from a dark wardrobe in Scotland. Very complex choreography by Shannelle ‘Tali’ Fergus to put Lucy in a forest with snow in front of a forn called Mr. Tumnus (Jez Unwin) his character was exactly how I remember the 1988 tv series soft and gentle towards lucy and plenty of enthusiasm. Great work Jez!

One of my favourite parts of the play was the rise of the witch played by Samantha Womack. I remember her dramatic exit in Eastenders at Christmas in 2016 when Ronnie and her sister drowned on her wedding day. Still, shocks me now that storyline! Samantha was perfect as the ice witch in this play composed, strong and evil. A lot of the entrances she was wheeled on stage on her throne and her minions looking after her. Just before the second half closes the evil witch rises to the top of the ceiling in a white dress creating a spectacular illusion as if she was flying. Magnificent! Well done Chris Fisher (Illusions)

The Puppetry was also excellent in this production Aslan the Lion played by Chris Jared was present with the gigantic Lion with two of the crew controlling the lion puppetry. Even a person moving his tail at the back was very effective and children loved the Lion well done Max Humphries.

I must mention the stage and lighting are absolutely amazing, the ability to turn from a wintery forest straight into a warm summer’s days quick and easy ring shapes in the stage with high lit LEDs; which corresponded perfectly with the Orchestra and moving parts on the stage plus the actors was astonishing. So many elements and moving parts to each scene, it really was remarkable to watch. Plus the appearance of the white stag/lion in the circle in the back of the stage really brought extra complexity to the overall effect via the clock.

I have to say Mum and I found Mr. and Mrs. Beaver (Sam Buttery and Christina Tedders) hilarious these two are a comedy act all in themselves! I don’t remember their characters being this funny in the original story an added touch from the director maybe Michael Fentiman or maybe Sally Cookson, whoever made these changes added an extra layer of comedic value to the play.

I have to mention all the four children Lucy (Karise Yansen) Edmund (Shaka Kalokoh) Susan (Robin Sinclair) and Peter Pevensie (Ammar Duffus) brilliant young actors and actresses very believable and relatable to the children in the audience. I especially liked Lucy (Karise’s) expressions on her face when she discovered Narnia. I think they are little stars and I look forward to seeing them in future productions.

I must mention the Turkish light dancing man he was ace! Great illusions again!

The was atmosphere electric, magical with a big heart. We loved the play!

Congratulations cast and creative 5 stars from us! If you are taking your children, the play can be long for children over two hours with the interval, buy snacks!

You must go and see this, absolutely amazing