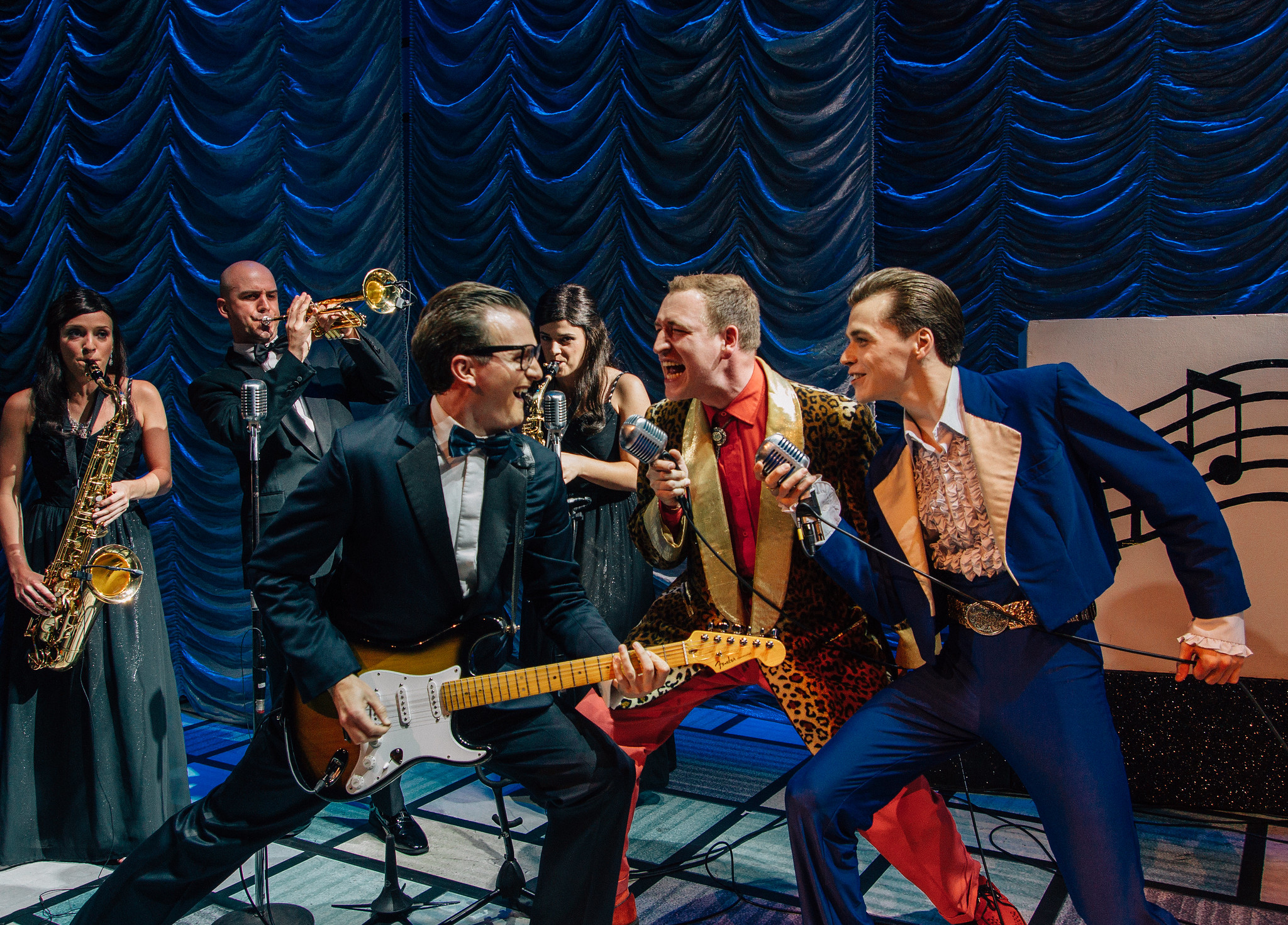 I have seen this show a few times now and every time I go I absolutely love it. The story focuses around the original King of Rock n Roll Buddy Holly from the late 1950s. Who is in his early career trying to break into Rock N Roll, when the radio stations only wanted to him to play country music, tipping him to be the next big country star. This wasn’t in his heart and so his journey began to Rock N Roll stardom in 1955.

Claire and I attended the press night of Buddy Holly the Musical on its opening night at the Lowry in Salford Quays. The tour is celebrating its 30th year touring the globe which now over 22 million people have seen it with glowing reports from the world media. For me I already know how good it is plus I was looking forward to seeing the new cast in this tours roles.

This tour Chris Weeks played Buddy. Which honestly I think he did an excellent job, charismatic, energetic a great mover and most importantly really sounded like Buddy with a brilliant voice, plus all buddy’s quirks in this voice. I really loved watching him play!

Harry Boyd played HiPockets Duncan who is the producer and radio show presenter which Buddy plays his live music lon. He has multiple roles throughout the show and he was great at getting the crowd warmed up for the end of show Winter Dance Party, he is a natural comedian.

Highlights for me included the songs ‘Oh Boy, Rave on, Rip it up and That’ll be the day’ Buddy and the Crickets in the first half just made it look so easy when they were performing. Bopping around the stage always with a smile on their face. Complete naturals with high energy and a pleasure to watch play!

My favourite part of the show was the second half the sets transformed in a glittering magic showcase show ‘The Winter Dance’ Party showcasing the Big Bopper (Joshua Barton) a fantastic character which made me howl with laughter at his dancing. Ben Pryer as Richie Valens had the snakiest hips I have ever seen in the the land and was a perfect addiction with his high octane dancing to the Buddy, the Bopper. All three of the actors were amazing at dancing especially one of my all time favourite songs ‘Johhny B.Goode’ an instant crowd pleaser and had Salford on their feet!

Miguel Angels Chreography was an instant winner with me having some of the cast jump and dance of their musical instruments like stunt men!

I must mention the two Apollo Performers (Cartier Fraser and Sasha Latoya) had plenty of sass and attitude the the second half and definitely had the powerful voices to match it, I really enjoyed listening to them sing. Plus the multi talented Miguel Angel who also had a great voice and was able to play the trumpet too. I also loved hearing the Saxophone at the end played Hannah Price, she was smashing and really added a sparkle to the over all performances.

The ending very tastefully done to mark the plane crash on 3rd February 1959 in Mason City, Iowa simply just Buddy’s guitar in the spotlight. Buddy’s, The Big Boppers and Richie’s last performance ever before they died. Buddy was 22 at the time, The Bopper (Jiles Perry Richardson Jr. ) was 28 and Richie was 17 years old. This is re quoted in Don McLean song (American Pie) years later in 1972 singing “The day the music died” very sad.

Still to his day 60 years later his music lives on through the musical, films, adverts and advertising campaigns. A legancy that will never been replaced.

Buddy the Musical is on my top three of favourite musicals of all time simply because the music is outstanding and the casting is always brilliant with the team picking very skilled musicians and actors to play these legendary parts.

Go and book this now trust me you will be dancing the night away and you will have a permanent grin on your face like the Cheshire cat!