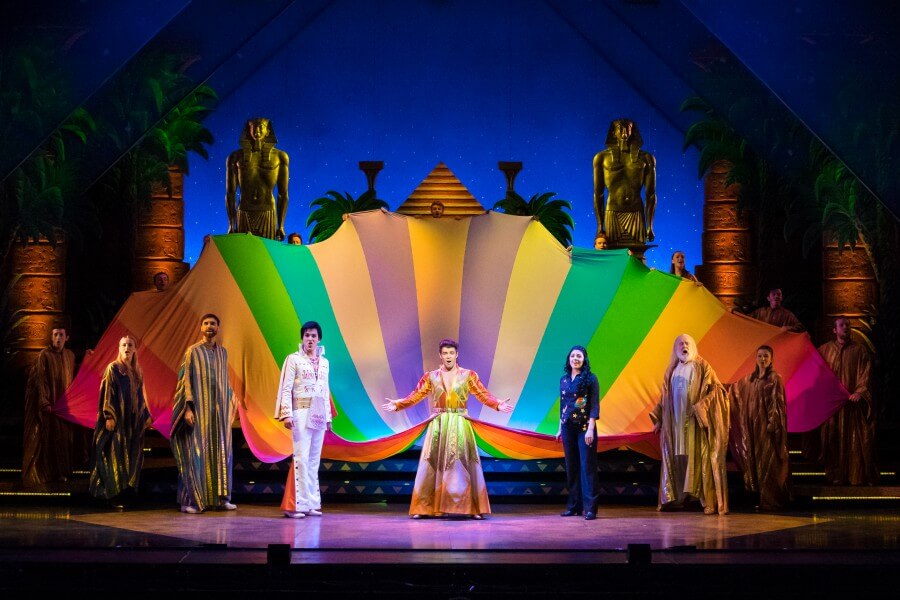 Last week I went to the opening night of Joseph and his Technicolor Dreamcoat at The Palace Theatre, Manchester.

The musical was written by Andrew Lloyd Webber and lyricist Tim Rice in the 1960’s and was based on the Bible story ‘Joseph and his Coat of Many Colours’. It was originally written for a Junior school production and developed from there. The tale in itself is an interesting, yet dark story so I was intrigued to see how they brought this to the stage.

Joe Mcelderry (a previous X-Factor winner 2009) leads the cast in this latest production of the show. His voice has a beautiful tone, is much more powerful than I anticipated and has excellent range and vibrato, which soared throughout his solos and the ensemble numbers. I even got goose bumps when he went into his upper register during ‘Close Every Door’. I was really impressed with his performance and he could easily lend his voice to more challenging musical theatre roles. Vocally, I could see definitely him as a Marius in Les Miserable or Raoul in Phantom. The narrator played by Lucy Kay was not bad but her voice wasn’t as Strong as Joe’s and did grate on me after a while. The remainder of the cast were very energetic and brought vibrancy to their roles. The choir of children was a particular highlight and they were brilliant.

The staging, props and lightning were very joyful and colourful. Unfortunately there was a few first night hiccups with these. A lamb that should have stood up, flopped over, much to the audiences amusement and the timing of vocal parts to music was slightly off. The worse mishap of the evening was when the curtain began to raise after the interval. The choir of children were centre stage and singing their little hearts out and unfortunately the curtain got stuck mid-air so all we could see was the children’s feet and not their singing faces! They carried on regardless and received a huge round of applause for their efforts.

The show, in my opinion, really suffered from the use of using a CD for the music. Not having a live orchestra/band makes a massive difference to the feel of a show. Also, some sequences were just cringe worthy such as the when Joseph goes to Egypt and meets the Pharoh, which in this musical is played as Elvis and a whole section of songs is delivered in a cheesy, daft way. It was just too cheesy and silly for me. The show is so like a high school production (as is meant to be) that I just couldn’t take it seriously as an up-scale theatre production. I really hoped it would prove me wrong and I would walk away saying I loved Joseph, with some new catchy tunes in my head. Unfortunately, I left knowing that I will never watch this musical again and will definitely be booking to see Jesus Christ Superstar, Phantom or Cats just to restore my faith in Andrew Lord Webber once again.

Don’t get me wrong, if you love Joseph and his Technicolor Dreamcoat, you will love this version as it is well produced and cheerful.

However, if you were considering seeing it for the first time and are unsure whether to book… I would advise to …spend your money on a different show.