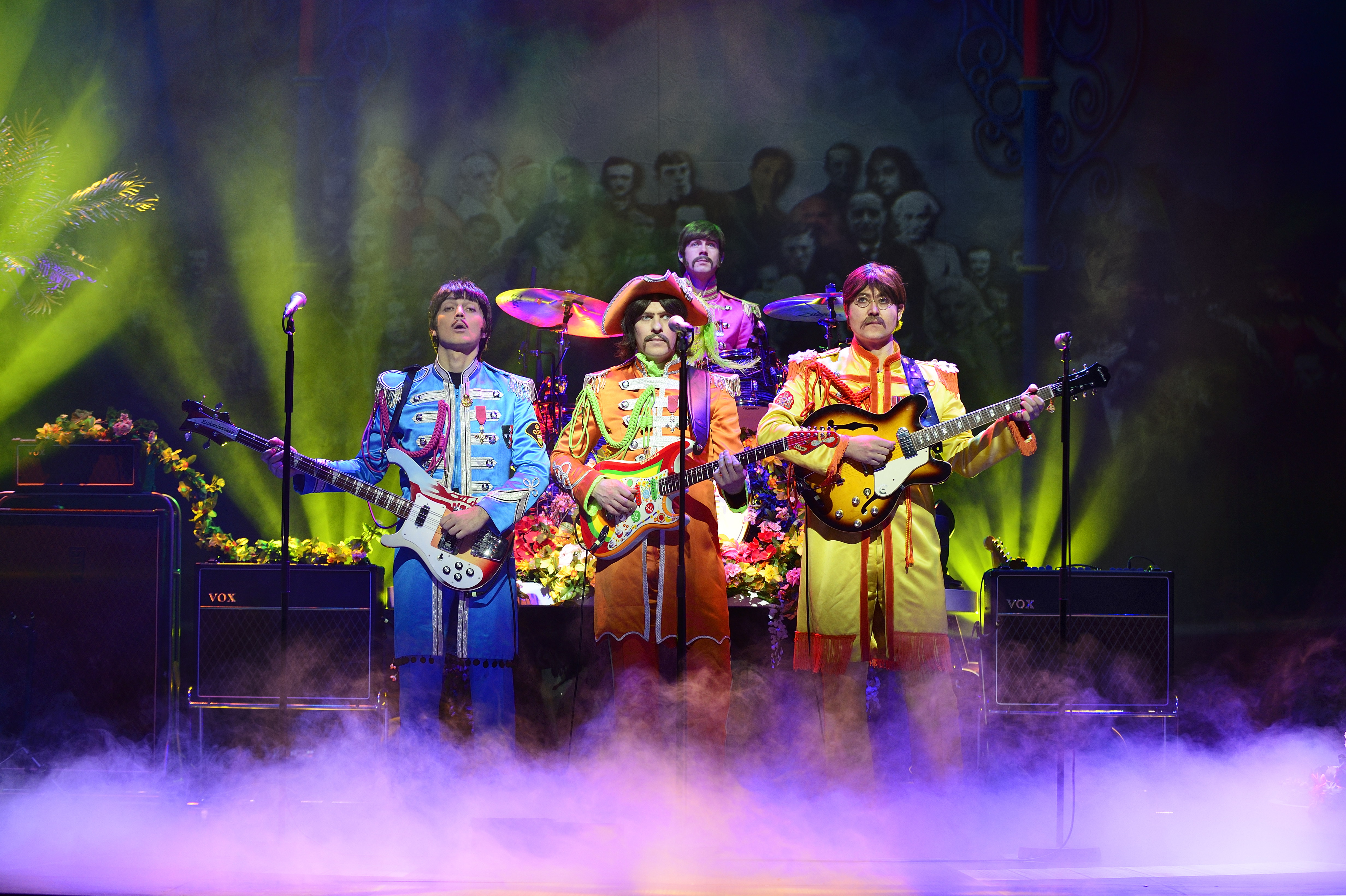 Last night we attended the opening night of the ‘Let it be Tour’ a live show featuring four guys taking off the legendary ‘Beatles’:-

Playing one of one of the biggest bands in the world’s music. Who at the height of their fame sold a total of 600 million records sales worldwide. I met the band in September who had the attention span of a fish, but were really nice and funny – http://www.backstageaccess.co.uk/backstage-with-let-it-be/ they played an acoustic set at Hard Rock Cafe as a preview to the show we saw last night.

The show opened heading straight back to 1963 with the opening song of ‘She loves you’ at the Royal Variety performance in London in 1963. I watched the original performance online after watching the ‘Let it be’ show last night and John Lennon says “For our last number we would like to ask your help – for the people in the cheaper sits clap your hands and the rest of you just rattle your jewellery”. Which Michael Gailanoo repeated last night which the audience found it funny. When the real Beatles said it in 1963, the camera cuts to the Queen Mother; who also found it funny in 1963. Which back then won the major headlines in the newspapers the next day. Proving even back then not only were they incredibly talented but clever too. It was nice that the show repeated that in the performance last night.

The show took you through the Beatles amazing back catalogue of hits. Which was nice to see mum and Angie (who are in the sixties) reminisce about where they were when the songs came out. ‘My sweet lord’ really got my mum as she says she was in Jersey in 1970, she began to tear up as it obviously brought some nice memories for her.

One of my favourite parts of the show was the set design; which had four old-fashioned televisions around it and during breaks and at the start, it showed some of the 1960’s television adverts for cigarettes, shampoo and alcohol. Interested to see how ad campaigns had changed through the years and in 2018 cigarette adverts are totally banned now. Well done Darren Bramwell and Mathieu St- Arnaud awesome videos!

The second half of the show bought an element of Rock n Roll with hits like ‘Rock n Roll music and Roll over Beethoven’ guitar solos from John, Emanuele and Michael. They mentioned rock royalty like Buddy Holly, The Big Bopper, Elvis, Jerry Lee Lewis, Bill Haley and Little Richard were playing on a screen behind the band as they were rocking out! The audience were on their feet shaking their hips and clapping to the beats.

They finished off the show with some of Paul McCartney’s solo music which he did with his band the wings. I loved the song ‘Live and let die’ which he wrote for the 1973 James Bond movie. Dramatic loud and Emanuele did a great job!

Honestly, the sets, outfits and the band are awesome and they really take you to Beatles mania! Four both very talented men who will have you standing on your feet rocking out. Supported by the awesome Phil Danny on strings and his pork pie hat!

For any Beatles fan or anyone that just wants a good night out at the theatre.