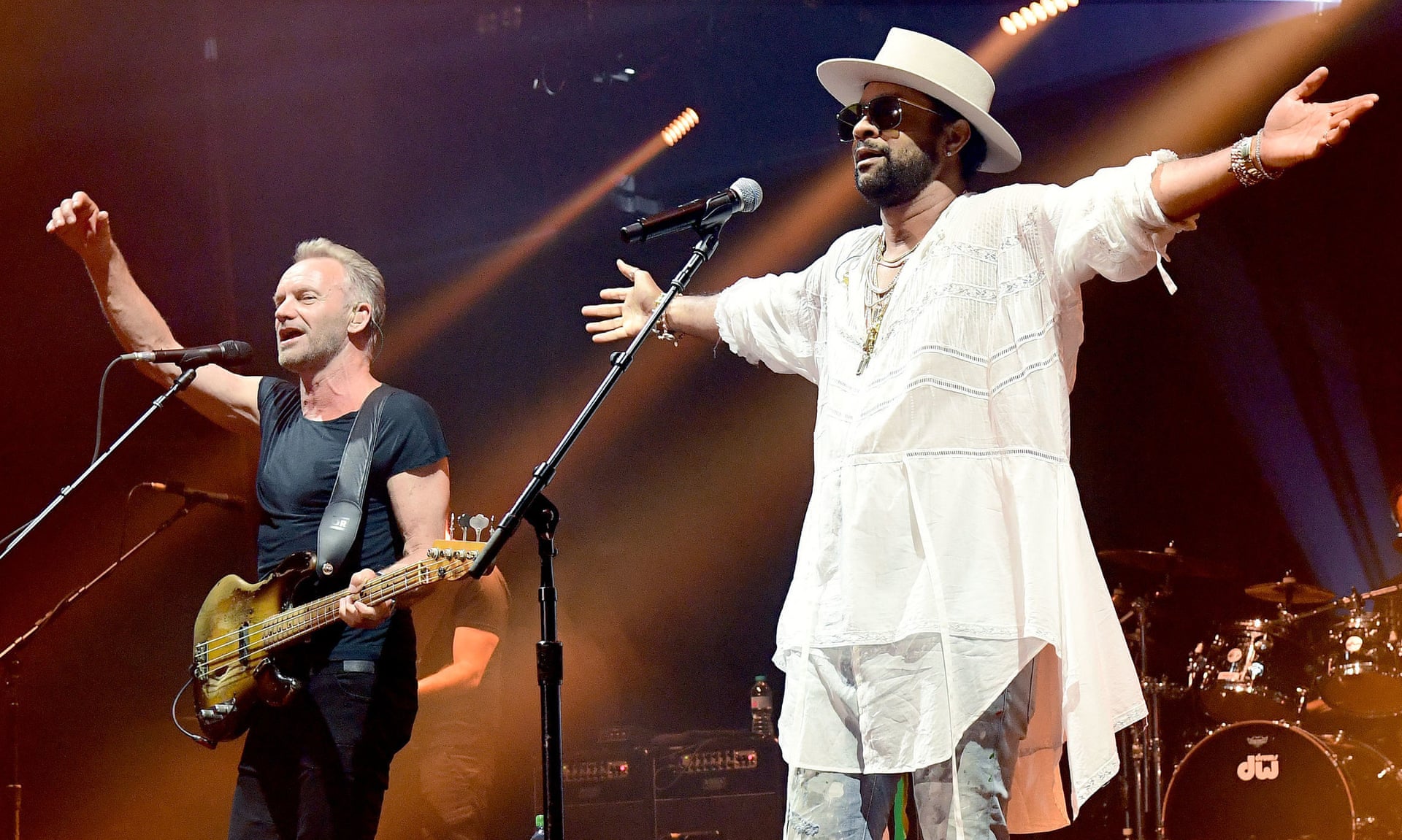 When I hear Sting and Shaggy had teamed up to start a UK tour I must admit a bit skeptical about it. Shaggy has a completely different sound to Sting, Shaggy’s music I would class urban reggae Jamaican flavour with a dose of pop and Sting a rock and roll star with a soft voice with a magnificent vocal range. Honestly, I wasn’t really sure what to make of the whole thing. I am a huge Police fan and have been listening to their music for years and in the late 2000s Shaggy’s music was big the UK with number one hit “It wasn’t me” and other hits!

Last night I attended the Sting and Shaggy tour 44/876 at the 02 Apollo in Manchester. I went downstairs about three rows from the front just as Sting and Shaggy came on. The atmosphere was electric and the crowd was in a good mood. The stage lit up as they both came on to a roaring crowd.

The first track ‘Wake up to sunshine every morning’, sings Shaggy. Proper laid back tune and kind of sets the mood for the entire night really. Listening to the reggae drum beat and the horns its easy lyrics to follow and the crowd and myself cant help but join in.

For me as a massive Police fan, it was amazing to see Sting some of the Polices greatest hits. “English man, walking on the moon, so lonely and every breath you take” have been worldwide hits for the police Stings voice hasn’t changed a bit since I saw them in Manchester ten years ago with my mum. The magical element about this gig is Shaggy he brought a fun, sexy Jamaican vibe to the whole show. I loved how the two fused their music together each one having their appreciation for each others track.

I loved the ‘Roxanne and Boombastic’ songs the crowd was jumping up and down (me too) I also loved the fact that neither of them had big egos. Very humble down to earth musicians! Every now and again Shaggy would shout ‘Love one another and peace’ I suppose a Bob Marley vibe.

Highlights for me included the tracks mix of ‘English man / Jamaican in New York’ changing the lyrics to Jamaican in New York for Shaggy. It’s mad because it has been over 30 years since this track first came out in the UK and the video on youtube has had over 172 million views, up to and including today. Proving great music never dies!

Later on, they played “Roxanne, Boombastic, Can’t Stand Losing You” and perhaps Shaggy’s greatest-ever effort, It ‘Wasn’t Me ‘ followed and whipped the crowd into a frenzy.

The fans demanded an encore and as the stars returned to cheers and applause, Sting ended the night in the only way he could, really, with Every Breath You Take – amazing – literally cried my eyes out. Such a beautiful song.

These two throughout the performance clearly has good banter in one of the tracks dressing up as Sting came right to the front of the stage to dress up as a criminal and then shaggy as they judge very funny.

If you are wondering why the tour is called 44/876 tour this refers to the country calling code for the United Kingdom (+44) and the North American area code for Jamaica (876), Sting’s and Shaggy’s respective home countries. In the first three months, the album sold over 500,000 copies worldwide. A nice title to show their collaborations.

Without a doubt, this is one of my favorite gigs I have ever been to with Sting wildly insane talent, which he makes looks effortless and Shaggys sexy Jamaican vibes rapping and fun these two have definitely left me with a night to remember.

The tour is now finished and Sting will head to Europe to tour as a solo artist. I  hope Sting and Shaggy tour again because they were amazing! A fantastic night!

Five stars from us congratulations!

A thank you to Jenny at Chuff Media