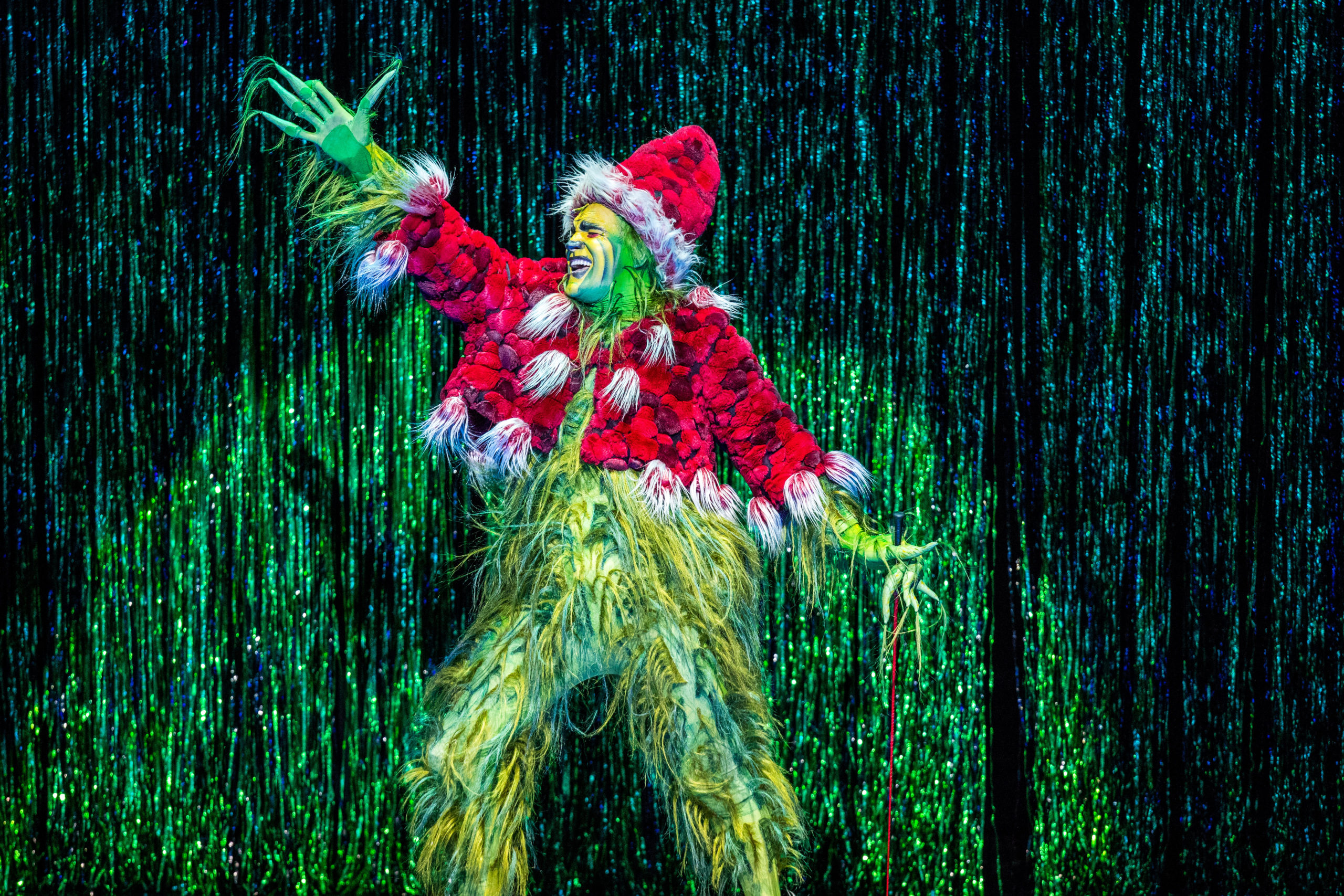 Its been 19 years since the Dr Seuss’ How the Grinch Stole Christmas came out in Nov 2000. Starring Jim Carrey as the Grinch and Directed by Hollywood legend Ron Howard. The film became a huge hit and made $345 million at the box office. The film originally adapted from a book written in 1957 Dr. Seuss’s Theodor “Dr. Seuss” Geisel.

If you are not familiar with the plot line here is a quick summery. The story follows the Grinch, a grumpy, solitary creature who attempts to put an end to Christmas by stealing Christmas-themed items from the homes of the nearby town Whoville on Christmas Eve. Miraculously, the Grinch realises that Christmas may not all be about money and presents.

The Grinch musical first came to stage in 1994 adapted by Timothy Mason and has been a hit on its UK tour ever since.

Last night Auntie Julie and I attended the green carpet press night of Dr Seuss How the Grinch stole Christmas. Stars of stage and screen entered on the green carpet and posed for photographs in front of the Grinch backdrop in the Lowry Theatre in Salford.

The theatre was a packed house with loads of families and children and really nice to see alot of the children dressed up as the Grinch and some of the ‘Who’ characters too. I saw two little girls dressed in red and pink with red bows in there hair must have only been about 5 looks very adorable.

The show started with one of the Who characters taking some children from the audience and reading to them intro to the Grinch story, really nice touch using the children for the audience, because it immediately makes them feel part of the show.

All of the Who characters came on to the stage very bright costumes full of song dancing around the tree and talking about the Christmas, I loved the set design because it reminded me of retro black and white cartoons from the original book. The Who’s were bright and cheery and very upbeat with a fantastic children’s sets.

The night was narrated by Giff Rhys Jones OBE who has had a acting career originally from Cardiff his careers spans across forty years for comedy, acting, writing and producing. He played an old version of the dog in the play and did a really good job at explaining the scenes to the children and taking the mick out of himself.

In enter the Grinch from his dark cave played Edward Baker-Duly his costume and makeup looked very real and the longest fingers I have ever seen on a Grinch! His entrance made me and all the children giggle putting his fingers around the cave and slowing creeping into tell the children how much he hates Christmas.

The Grinch was joined by his side kick his dog played by Matt Terry (X Factor winner, 2016) perfectly cast with the Grinch and in the joint numbers has a powerful vocal range.

Edwards timing as the Grinch was perfect, he reminded me alot of the Jim Carrey version. With his long fingery hand and his hatred for Christmas you cant actually help feeling sorry for the Grinch after all he heart is two times smaller and he is one of kind. I don’t think he actually hates Christmas just the idea of being alone and different.

All this is about to change by a very talented Isla Gie a little girl who plays Cindy Lou. Very confident little actress who often as times has long monologues and remembers her lines perfectly. Showing the Grinch kindness and love manages to turn him and join the festivities after he tries to steal the Who’s Christmas presents. Surprising Isla has a massive powerful voice considering she is so young.

Highlights for me includes the amazing costumes pom poms, candy canes, swirls and cakes worn by the Who’s together with the bright sets and black and white backdrop looks amazing.

The Grinch looks great to, especially in his Santa disguise I would have loved to try the jacket on myself.

I loved the special effects of the show too the way the Grinch’s heart grew under his costume and during the Christmas song the Lowry made it snow all the children stood up out of their seats to watch it snow on them in the audience a lovely festive touch!

All in all a fantastic night had by all, the children left the theatre upbeat and happy and of course after a performance like that, we also had a standing ovation at the end with a dance.

The Grinch is suitable for all ages and has a live orchestra at the back of the stage which is lovely.

Its a 5 star from me, I thoroughly enjoyed it and so will you’re children!

Thank you to the Lowry for hosting a lovely press night.