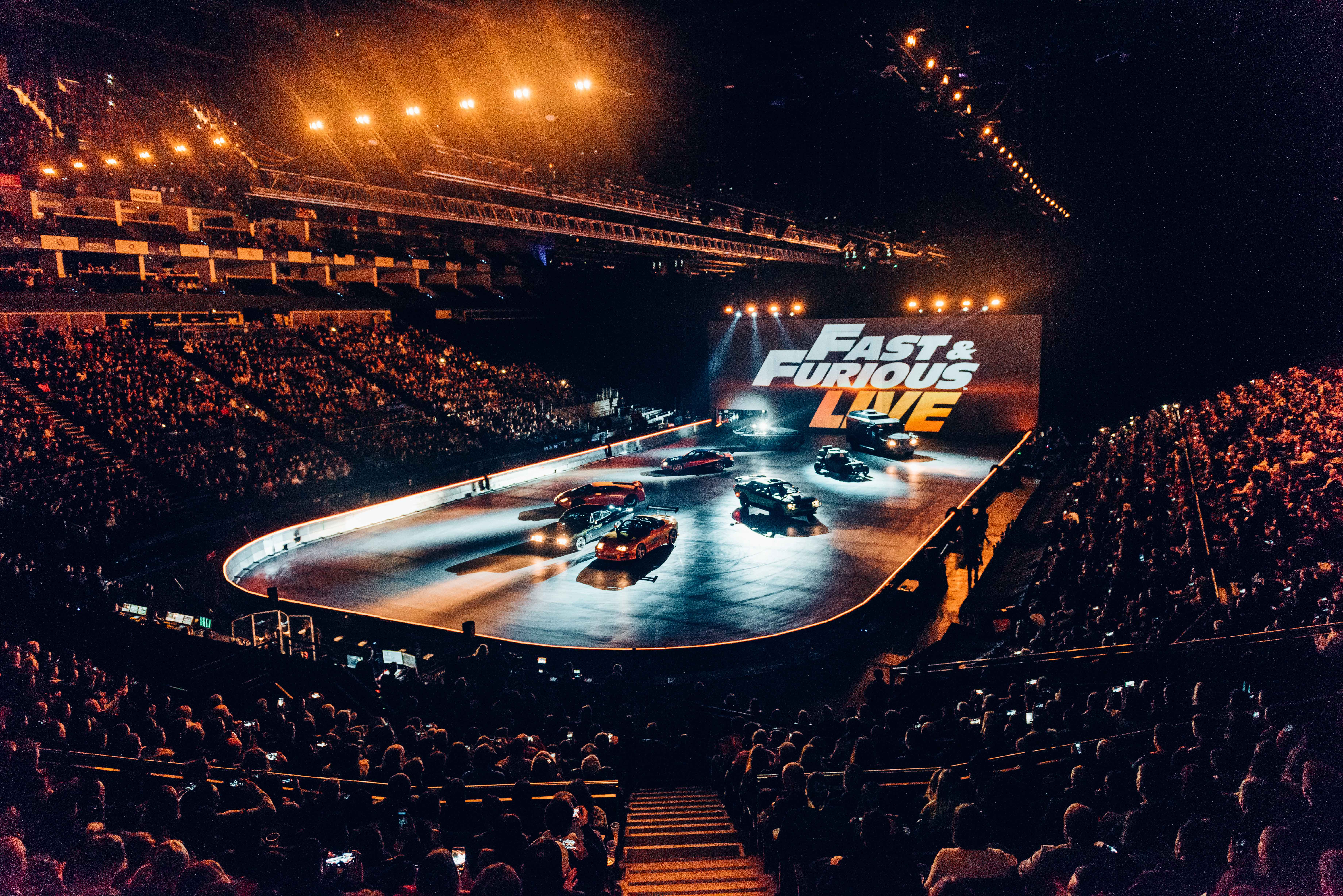 Flying cars, tanks, a plane, a submarine and over 40 amazing supercars jam-packed into a spectacular two hour show. Last night I attended the opening night in Manchester of the Fast and Furious Live show. I had an idea of what to expect as I went to watch TopGear Live in Liverpool a few years ago, which I thoroughly enjoyed. The same Creative Director Rowland French has a long history of producing and directing TopGear the BBC Television show and Top Gear Live arena tour show. I knew something good was coming in this production.

The show starts with a dramatic entrance of the best cars in the show. Mist rises around the cars creating a dramatic entrance for the cars. The screen lifts and the  iconic 1970 Dodge Charger comes out (Dom’s car from FF one), Mitsubishi Eclipse (Brians car from FF1- Lime Green) Toyota Supra (from FF1 the original 10 minute car in Orange) the original Lamborghini Murcielago (Romans car in F8 – Orange) Nissan Fairlady Z/350Z (FF3 Tokyo Drift – Sean’s  car- Silver & Black) Nissan Silvia S15 – FF3 Toyko Drift) Ripsaw car (FF8 – Tej’s) and the awesome Flipcar (FF7 – Shaw’s). For all you petrol heads like me out there you will definitely love the array of fast cars this show provides.

The show like the films has a plotline, to catch the bad guys! The show is narrated by Agent Dawson played by Mark Ebulue and the beautiful Sofia Diaz played by Elysia Wren, who looks like she just has stepped out of a Fast Film. The show takes you on a journey to Miami, New York, Toyko, Abu Dhabi, Iceland, and LA.  Iconic scenes from the movies and copied into the show. A series of dangerous stunts (Chase Armitage jumps over a moving car wow!) nail-biting drifts in Toyko, cars on fire bullets flying everywhere makes this show captivating, exhilarating and exciting.

My first favourite part of the show is in the first half with the LED cars. The Honda S2000 (Suki’s car from FF1 – Pink) the Toyota Supra (Slap Jack’s from FF2 – Yellow) the Mazda RX7 FD (Julius’ cars from FF2 – Orange ) and the legendary Nissan Skyline GT-R R34 (Brians original car from FF1) do a series of races, twists turns and drifts on the track. They line up just like Fast and the Furious one and suddenly the cars charge colours to different patterns, styles and finishing up with diamond-like cars racing each other at the end. Truly magnificent to watch each of the cars twisting and turning within inches of themselves. Dangerous and thrilling to watch.

This show is a family fun, car enthusiast experience. Which has plenty of opportunities for the audience to get involved with. At the beginning of the event the audience were all given flashcards with different colours on each side. They brought out a broken down old car which they would do up. The audience had to vote on what colour they would like the car built in and various other different cars parts to be added. I was surrounded by families with young children and they loved the parts where we had to vote holding up their cards high for Dawson and Sofia to see. This theme carried on the in the production where we used the cards to race the cars and vote on how it was driven. The children around me loved this concept and were screaming with excitement. Clever concept Rowly and your team!

My second favourite part of the show involved the amazing Lykan Hypersport 3.5 million hypercar, drifting, mad machine awesomeness (the red car from FF7) Speaking to the drivers before the event. I met Jessica Hawkins a carting and car racing champion who had the car specially adapted to her. I also loved the fact that a girl was driving my favourite car and that she wasn’t the only woman driver in the stunt team 🙂

The Lykan Hypersport comes speeding into the arena chased by tanks and the police firing bullets and chasing her. For me again a thrilling and exciting experience to watch!

This show has state of the art 3D projection mapping on the arena floor. Which it looks like the cars are actually driving in the different countries. Creating a perspective view for the audience making the event more real.

This 25 million arena tour is fantastic, fuel pumping, adrenaline racing and consists of dangerous stunt driving. Perfect for families as its an interactive show which they can get involved in. For petrol heads like me, it was thrilling, a perfect reminiscent summary from a decade of Fast and the Furious films. Vin Diesel is also the front man for this production appearing on screens adding to the excitement. Even giving is a nice message at the end “Remember when you go home. Respect each other. Love each other. And there’s nothin’ in the world who can stop you. Salud, Mi Familia” nice touch!

This is the First time this show has been created and is in the early stages if a 6 month European tour. Twenty Three cities across 14 different countries ( Belgium, Italy, Austria, Germany, Netherlands, France, Portugal, Spain, Switzerland, Sweden, Norway, Finland, and Denmark) The show is in Manchester till Sunday 15th April 2018 after this they carry on with the rest of the UK Tour. Go and book this now! There nothing else out there like it!

And yes Paul Walker would have loved this production too.

Before the show, I was lucky enough to meet the Creative Director and two of the Drivers catch their interviews below:-

What a lovely team, thanks for having me 🙂