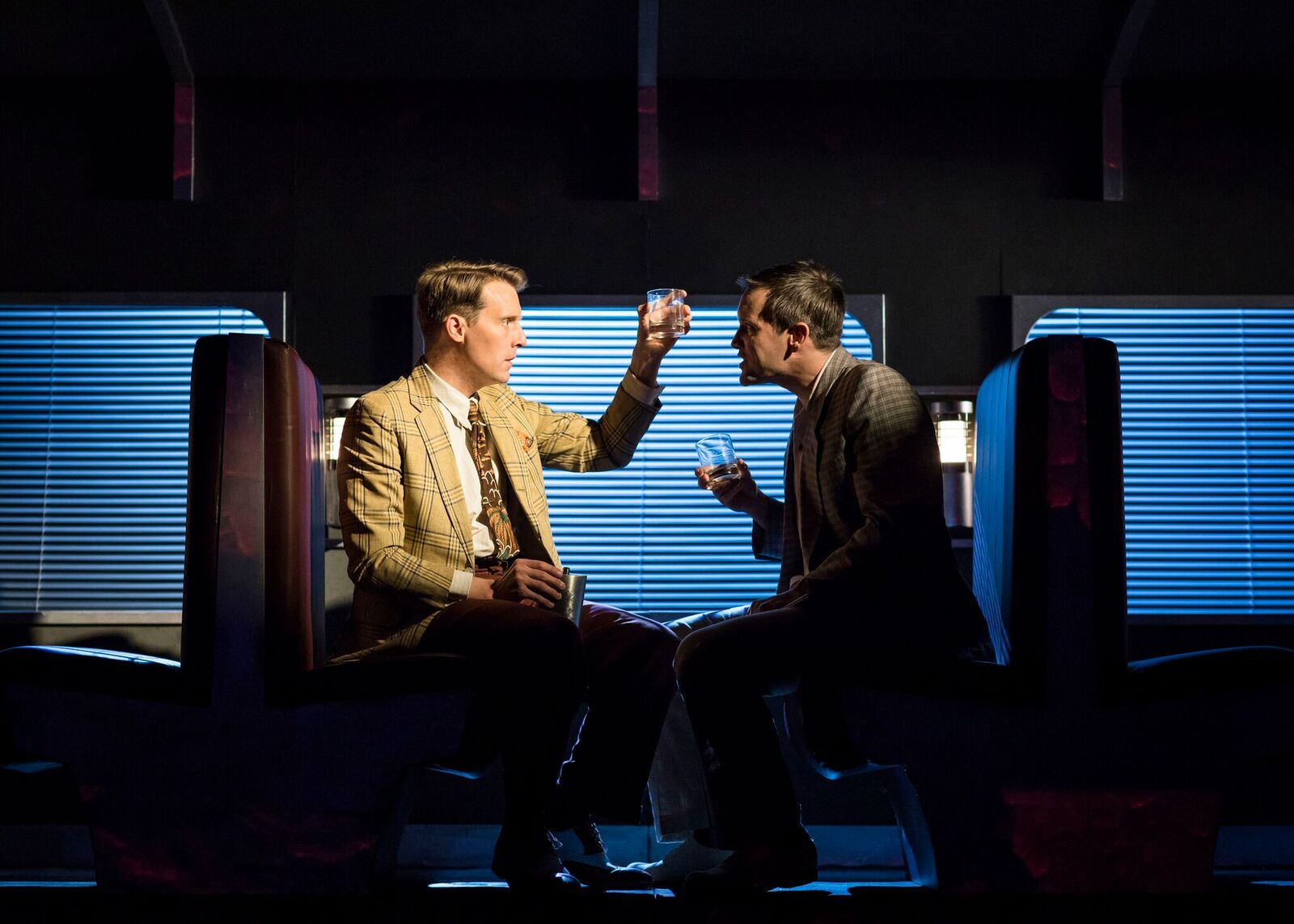 To be honest with you, I arrived at the theatre had not seen the production previously, read the book or watched the Alfred Hitchcock version. My mind was completely blank as to what I was about to watch.

Honestly? I found the play dry, I didn’t really like the storyline or how it was portrayed through the characters. If you haven’t seen the movie before this is the basic storyline. The story concerns two strangers who meet on a train in the 1920’s, a young architect and a charming psychopath. The psychopath suggests that because they each want to “get rid” of someone, they should “exchange” murders, and that way neither will be caught. The psychopath commits the first murder; and then tries to force the architect to complete the bargain.

The main characters Charles played by Chris Harper and Guy Haines played by Jack Ashton.  Charle’s played the psychopath pushing Guy into all sorts of trouble. I loved Charle’s character I think he played a young drunk extremely well and he got the American southern accent down perfectly. A far cry from the character he played in Coronation Street last year. He reminded me of Nicola’s Cage the way he pulled his faces, and the language he used to persuade people to do what he said. Charle’s character wasn’t convincing for me, he seems dry and unemotional in some scenes and occasionally dropped his accent. Sorry, Jack!

The same goes for the character Elise Bruno played by Helen Anderson. I found the character boring and uninteresting. With the longest monologues ever!  I didn’t think she matched well to Charles as his mum.

I thought the production was poorly directed (Anthony Banks) and the casting (Anne Vosser) didn’t fit in the play. I think the only part they really got right was Chris Harper.

Very disappointed with Arthurs Gerard’s character too played by Emmerdale’s John Middleton. Considering he is in the main poster campaigns as a selling point he only came in the play on the second half, playing an unconvincing policeman.

However, I did enjoy Anne Faulkner’s character played by Hannah Tointon and I thought her and Charles had great chemistry. When Charles and Anne were drunk in the second half I found them hilarious!

If you like Alfred Hitchcock plays maybe this is for you, I thought it was dull and dry. I expected the ending to be something spectacular, but it was a major let down. The best thing about this play is Chris Harper’s accent (great voice coach Elspeth Morrison) and his falling about when he was drunk. The music in the play too was very forgettable.

Then continuing the tour in the UK.

Jack Ashton is running the London Maraton in April for CALM (Campaign Against Living Miserably) support him here: https://uk.virginmoneygiving.com/jackashton