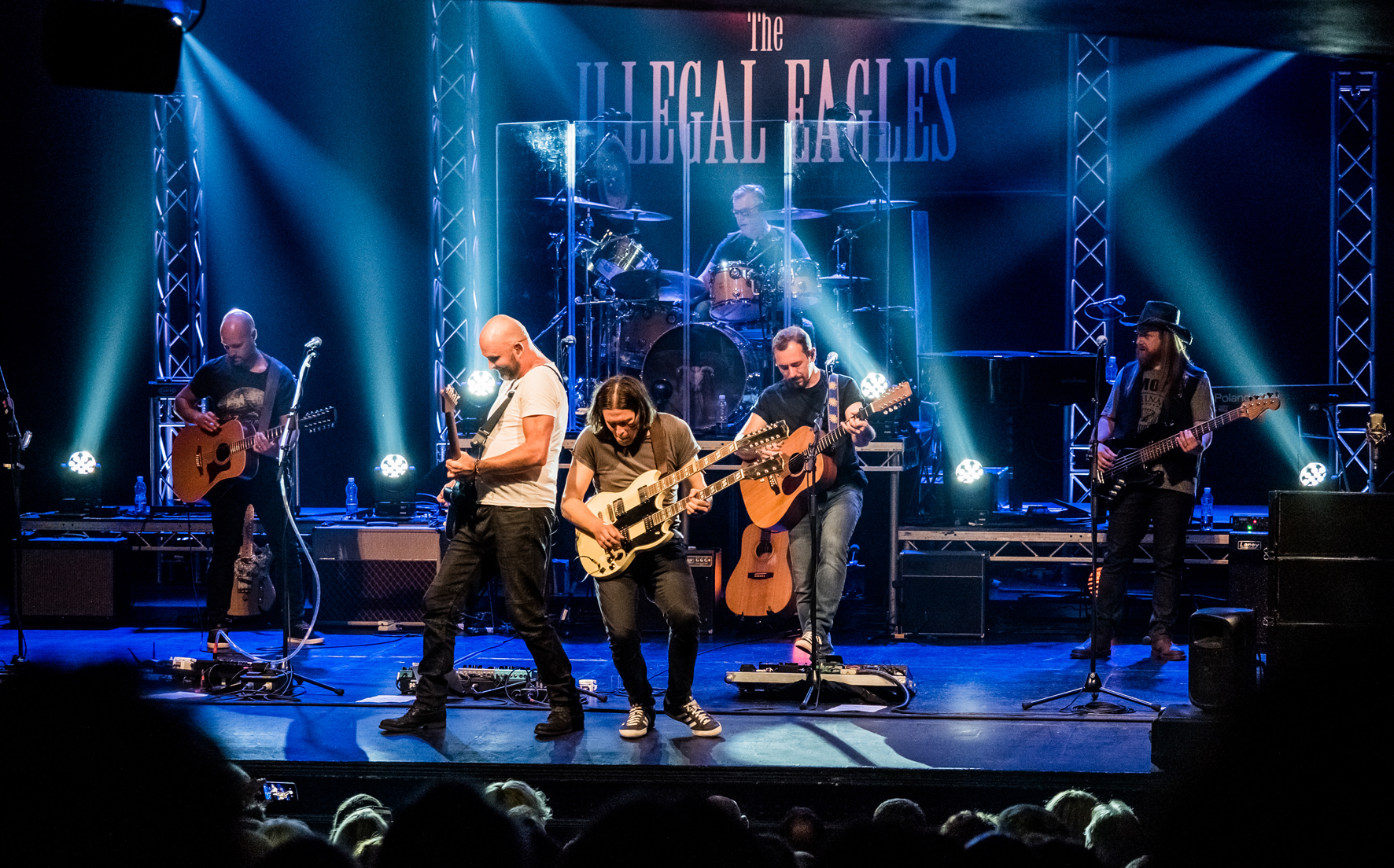 In the Summer of 1971, an American Country Rock band formed in Los Angeles called the ‘Eagles’. Founding band members were Glenn Frey, Don Henley, Bernie Leadon and Randy Meisner. They went on to be one of the biggest Country Rock bands in the world with five number one singles and 5 award-winning albums and selling over 150 million records. Even now four decades later in 2018 their songs are placed on adverts, at festivals and are currently in mainstream music covered by other bands.

20 years ago ‘The Illegal Eagles” formed the ultimate tribute band to the iconic Eagles. Last night mum and I went to watch them at Crewe Lyceum Theatre in Cheshire. The current members of the band included Christian Phillips, Greb Webb, Mike Baker, Garreth Hicklin, Trev Newnham and Tony Kiley on the drums.

As the curtains opened they played the Eagles very early songs, all the way back to the current day. Highlights for us included Life in the Fast Lane, Take it easy, The long road out of Eden, life’s been good. The band had a really nice rapport with them and clearly enjoyed playing their guitars and loved rockin’ out inches away from the audience. Trev was the ultimate banter king telling us stories, introducing the band members and pushing the merchandise stand and the DVD to its limit haha!

Mike Baker the newest member of the band only 12 months in, performed and sang some of the Eagles biggest songs and like me who wasn’t even born when the Eagles first formed as a band. Only in his early twenties and such a talented lead vocalist and multi-talented guitarist.

A highlight for me was Christian Phillips who played ‘Boys of Summer’ which is my favourite Don Henley song and always heard it playing in the summer at festivals covered by other people. Christian came out playing his guitar right in front of me, I couldn’t stop moving an thought at one point I was going to the invade the stage with my air guitar!

Mum’s favourite songs of the night the Eagles biggest hits Hotel California,  Desperado, and Tequilla Sunrise. The audience was rocking out on their feet, screaming and cheering especially when Garreth Hicklin played the mandolin!

All of the band members are multi-talented playing a wide variety of instruments at one point the drummer Tony even played the piano.

The band is currently on a very ambitious 140 date tour around the United Kingdom. Even if you are not a big fan of the Eagles music these guys guitar solos are some of the best I have heard seen and heard. I guarantee by the end of the night you will be you on your feet rocking out!

The band after signed merchandise for the audience and had photos with them. Really nice to meet you all mum and I had a wonderful night!

Go and book this now, I guarantee you will LOVE it.